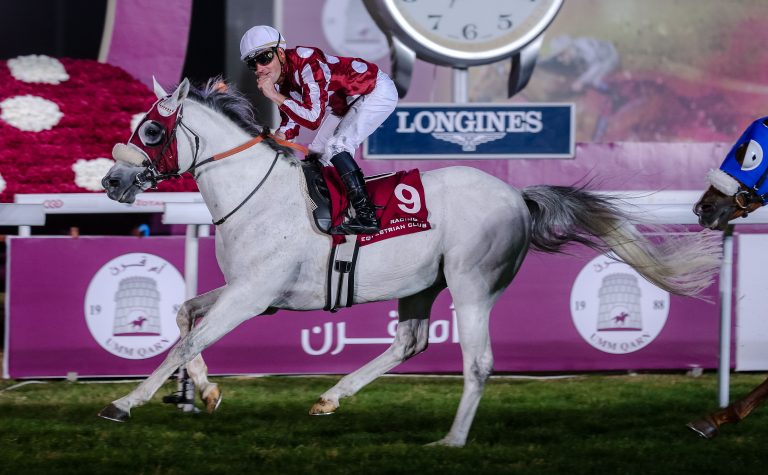 Winner of the Sheikh Abdullah Bin Khalifa Al Thani Cup in 2016 and 2017, TM Thunder Struck (Majd Al Arab) never faltered for this renewal, coming up the middle of the track to win for a third consecutive time in the hands of Jean-Baptiste Hamel.

Well position in the pack, the colt trained by Alban de Mieulle began to make up ground inside the final turn, still full of running. As soon it opened up in the straight, TM Thunder Struck surged up the center of the track and quickly took control of proceedings. Still on his heels in the final turn, Shabih Alreeh (Jaafers ASF) had to settle for second place, without ever been threatened by AJS Al Rayyan (Amer) who completed the podium.

A great American bloodline. TM Thunder Struck is a son of Majd Al Arab (Amer), who stands at Haras du Grand Courgeon. He is the most successful foal out of his dam, Bonnett (Burning Sand). She is a uterine sister to the champion Dixie Darlene (Wiking), winner of seventeen races including the Delaware Arabian Cup Distaff (Gr. I PA). She was voted Darley Champion 4 year old Filly and Darley Horse of the Year in 1998. Dixie Darlene then went on to become an excellent broodmare, and is the dam of Dixies Delight (Sam Tiki), winner of five Group I PA races, and Dixies Valentine US (Nivour de Cardonne), an eleven time winner and who holds two Darley awards, as well as Grilla (Kong), winner of three Group Is PA including the Sheikh Zayed Bin Sultan Al Nahyan Stakes at Houston. TM Thunder Struck’s second dam, BW Ali Catt (ZT Ali Baba), is also the dam of Mr Full Service (Sam Tiki), who won 20 races including the Arabian Cup Sprint Stakes and the Arabian Cup Godolphin Stakes (Gr. Is PA), as well as Ayers (Burning Sand), winner of twenty-three races.