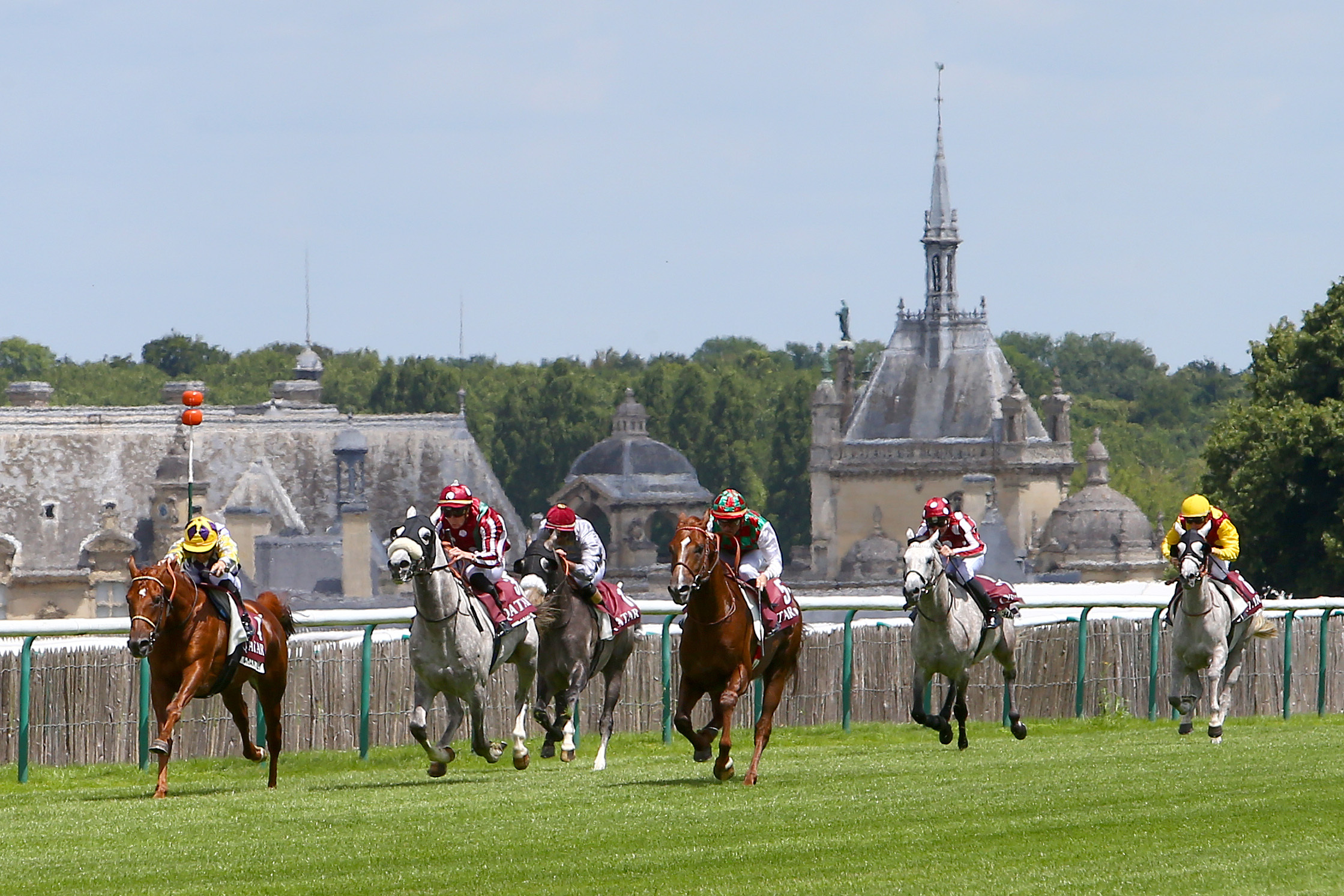 After creating a good impression on his winning debut at Toulouse in early June, Deryan (Mahabb) maintained his unbeaten record by producing a strong finish which carried him to victory in the Qatar Coupe de France des Chevaux Arabes (Gr. II PA). He mastered Fettah du Loup (Burning Sand) by just under a length with the hard pulling Marid (TM Fred Texas) taking minor honours. After bringing up the rear for much of the race in the small field, Deryan progressively cranked up his effort as Daloob (TM Fred Texas) set the tempo. Maxime Guyon kicked-on aboard Fettah du Loup in the final turn, and the combination were in front on hitting the straight. The latter looked likely to prevail 400 meters from the wire, whereas Alexandre Gavilan, showing a lot of sang froid, delayed his challenge to the last possible moment on the winner. Marid threatened after making a forward move which took him upsides the principals. However, it was Deryan’s final thrust, close home, which enabled him to carry the day. Not that his rider ever had to get to the bottom of him.

A PERFECT PREPARATION FOR DEAUVILLE

Deryan gave Didier Guillemin and his owner-breeder, Sheikh Mansoor Bin Zayed Al Nahyan’s Yas Horse Racing, a fourth consecutive success in this race. It’s a win which gains added kudos considering that Deryan has added his name to the honours’ board after following in the hoofprints of some very good PA horses such as Joudh (Mahabb), Dahham (Mahabb) and Mabrooka (Mahabb). Trainer Didier Guillemin and the racing manager of the winning owner, Thierry Delègue, chimed: "He’s a good horse with an easy going and serene temperament to match. I was delighted by the manner in which he acquitted himself. The fact that he had prior racecourse experience was an important factor as regards doing well in this Group race. Having been drawn wide, he would have seen too much daylight had we decided to ride him closer to the pace. The jockey’s tactics were spot-on as the straight is a long one, which gave the horse enough time to pick up in the final stages. He did what was asked of him. The season is a long one and he will need to back this performance up in his forthcoming races, namely at Deauville in the first instance. He may race during the Qatar Prix de l’Arc de Triomphe weekend in October prior to being aimed at the end of season Group races at Toulouse. Deryan is going to head to Deauville without having a hard race and is more precocious than his brother."

A  NEW OWNER FOR ÉLISABETH BERNARD

Regarding the second, Fettah du Loup, Élisabeth Bernard explained: "I don’t know him as well as I might as he has only been with me for two months, but he has a good temperament and is a pleasure to train. The orders I gave were totally contrary to what happened during the race. I had hoped that the horse would have been held up for longer, as he was beaten on a prior start by coming too soon. On dismounting, his rider Maxime Guyon said that he was unable to ride to orders in view of the horse’s positioning in the race and the lack of pace. However, I am still very satisfied as he beat a horse who had finished in front of him on his previous start at La Teste-de-Buch [editor's note: Marid]. In the final analysis, the only horse to beat us was from a yard in excellent form. Fettah du Loup runs in the colours of an Omani owner [Khalid Khasruzzaman] who is new to the yard. Oman holds a special place in my affections and the sourcing of this owner came as a result of the successes of Sylvine Al Maury (Munjiz), who is a star in that country. I’m delighted as I think that the Fettah du Loup is capable of taking his game to the next level."

MARID: A GOOD HORSE IN THE MAKING

Concerning the third, Marid, his trainer Antoine de Watrigant said: "We equipped him in blinkers as he has his own way of doing things rather than to sharpen him up. Since then, we have asked ourselves the question whether we did the right thing by adopting the headgear. He pulled hard in the first part of the race and, in future, we may resort to using ‘Australian’ type blinkers. He didn’t show his true potential.  Halfway up the straight, he picked up and started eyeing the other horses. He has quality’ in abundance as well as ‘superior’ potential. However, the horse needs to understand what we are requiring of him, although the 1,600 meters trip was on the short side for him. The winner is certainly a very good horse and I hope that we will have the opportunity to turn the tables on him. What he shows in the morning stamps him as something out of the ordinary, and he trains very well on sand. I would be disappointed if he doesn’t achieve great things as he exudes considerable class in the mornings. At Deauville, over a 2,000 meters trip, he might prove to be more relaxed if he can get the necessary cover during the race. His race at La Teste-de-Buch was better than this and, with him, we are looking beyond his three-year-old career. »

Deryan gifted his sire Mahabb (Tahar de Candelon) a fourth win in the Qatar Coupe de France des Chevaux Arabes. He stands at the Wathba Stud Farm, and the stallion band of Sheikh Mansoor have in fact generated the last five winners of this event, as Mindza, the 2014 heroine, was a daughter of Munjiz (Kesberoy). The dam of Deryan, Haboob (Akbar), ran second in the Qatar French Arabian Breeders’ Cup (Gr. I PA) for three-year-old fillies at ParisLongchamp. She has already generated Shahm (Mahabb) – the winner of The President of the UAE Cup – Coupe d'Europe des Chevaux Arabes (Gr. I PA), and a Qatar Arabian World Cup (Gr. I PA) candidate. The second dam has given Salaamah (Njewman), the winner of the Emirates Equestrian Federation Stakes (Gr. II PA) at Newbury; Aliaa (Djelfor) who is the dam of the Emirates Championship (Gr. I PA) winning Abhaar (Al Nasr); plus Aryaan (Kesberoy) who has generated Naseem (Mahabb), the winner of the Al Maktoum Challenge Round I and The President Cup (Gr. Is PA). Dahwa (Tidjani), a half-sister to Haboob, won the Prix de l'Élevage (Gr. II PA) as well as producing Najah (Munjiz) – one of the best four-year-olds of the current crop. She is coming off a win against her elders in the Prix Nefta (Gr. II PA) on her return. Thabit (Munjiz) and Bandar (Munjiz), who also featured in the ParisLongchamp race, were among her victims. 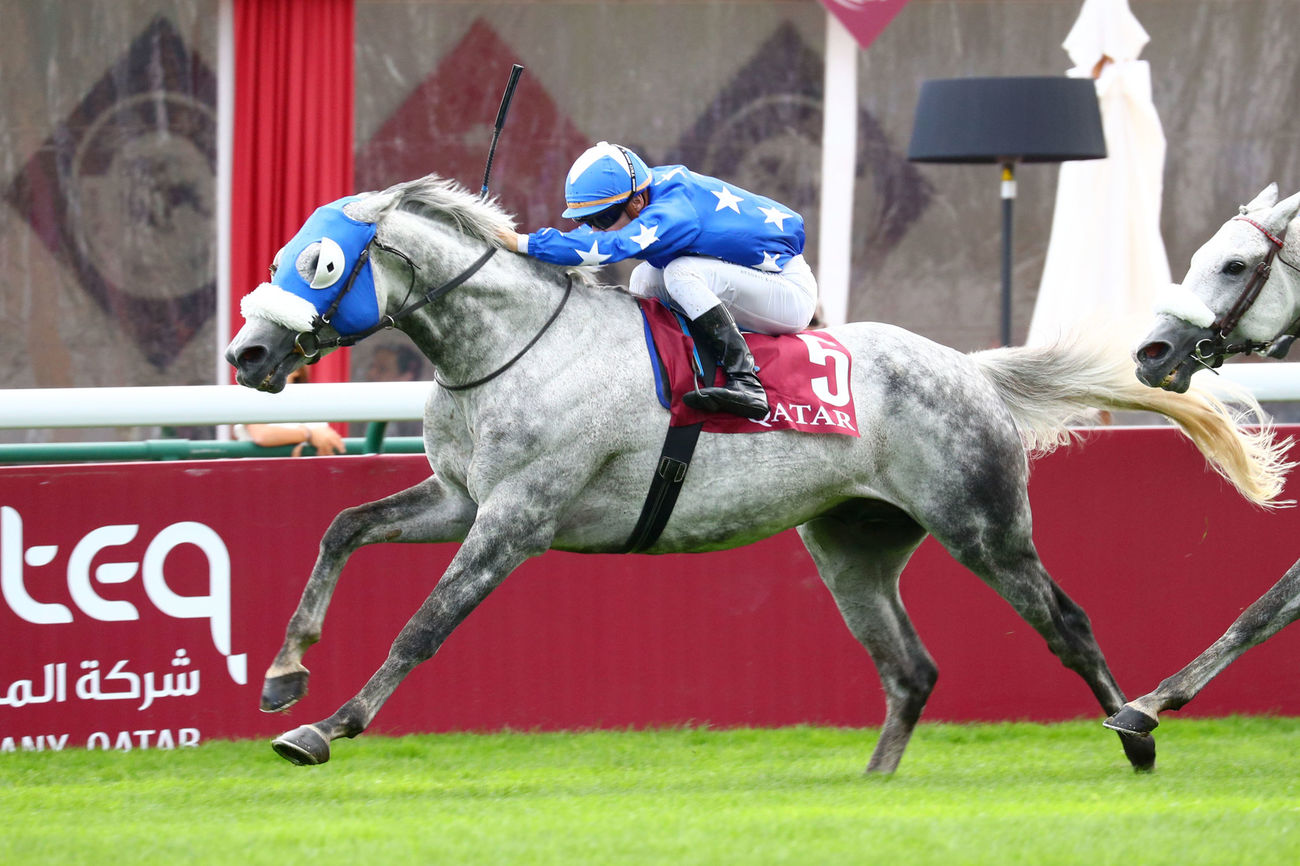 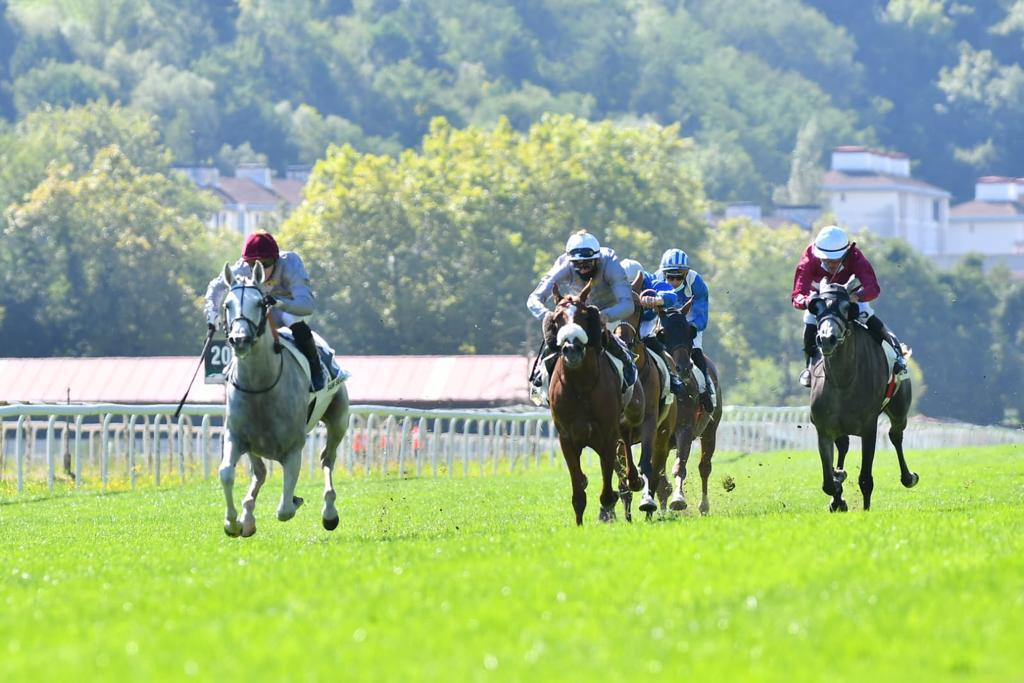