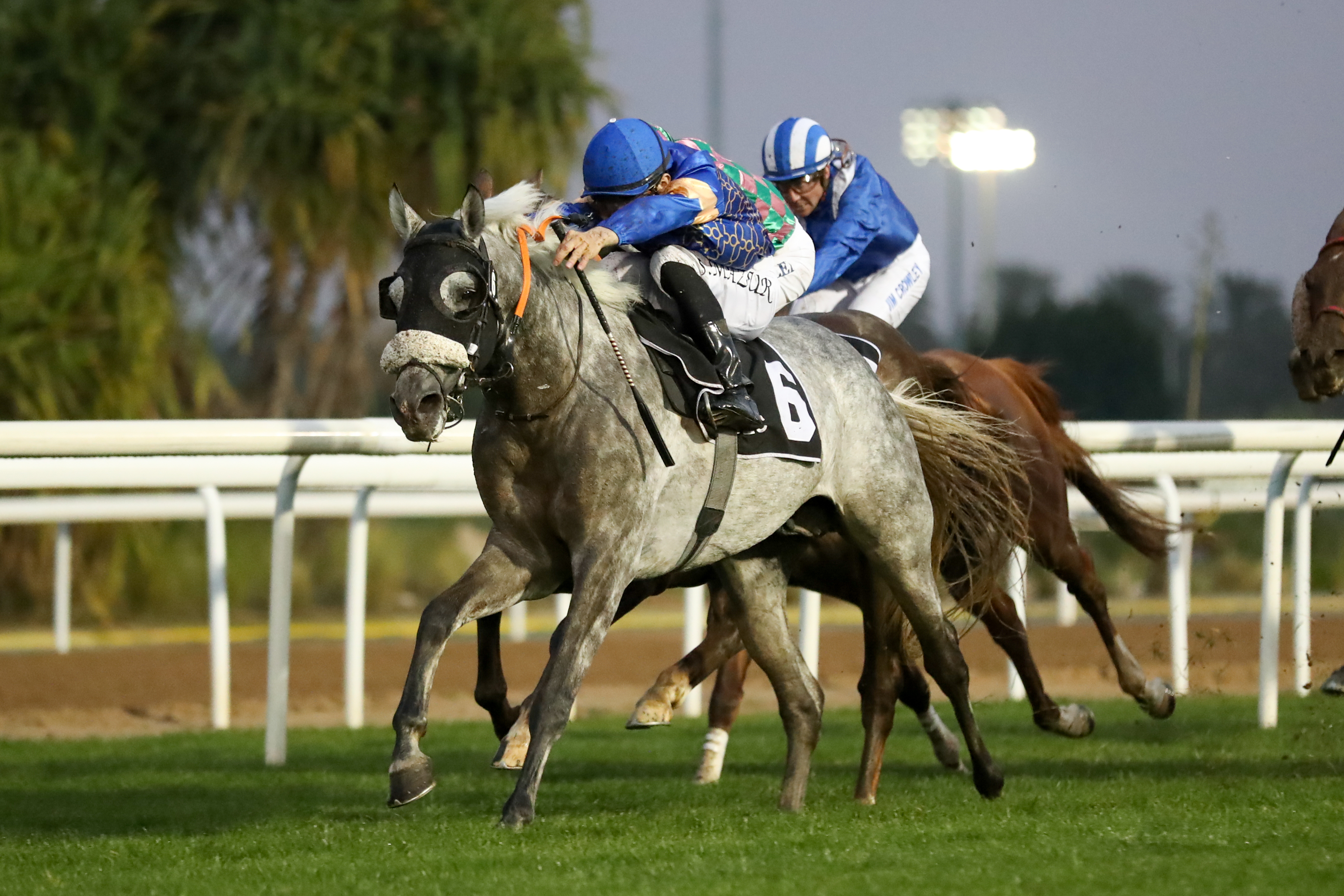 Born and bred in the Sultanate of Oman, Bf Mughader (Falak) proved tops in the Emirates Championship (Gr1 PA). Trained by Younis Al Kalbani and owned by Alwarith Ibrahim Al Hadhrami, he thrust himself into the thick of it after being held-up at the rear to beat the favourites. His momentum enabled him to get up on the line to deny the French-breds, Abu Alabyad (Akbar) and Rmmas (Mahabb), by three-quarters of a length and a short head. Al Zahir (Madjani), the defending champion, finished out of the places in fourth. He tracked his pacesetting stablemate, Af Mahshoum (Af Al Buraq) – and both carry the same colours – for much of the race.

More than just a first. The win enabled Bf Mughader, the author of a winning debut on the dirt at Muscat, to notch his first Group PA win. Szczepan Mazur, the winning rider, was obviously over the moon and he said: "I’m very happy and it marked the stable’s biggest win. He can sometimes prove to be a very a difficult ride – with a penchant for doing what he wants to do. Furthermore, he again started to fool about when getting on top at the line. Everything was in his favour here and namely the good ground and the strong tempo." Bf Mughader is probably the first Omani-born horse to win a Gr1 PA race abroad. Although Maisoor (Burning Sand), bred in Britain on behalf of the Royal Stables of Oman, and fourth in the Jebel Ali Racecourse Zaabeel International Stakes (Gr1 PA) at Newbury, won three times in Abu Dhabi, including The Arabian Triple Crown Round 1 (L).

Judicious imports bring their rewards. The great grandam of Bf Mughader was the Tunisian mare Budoor (Dynamite III) – herself a sister of the stallions Hyram (Prix El Ghazali, Gr3 PA) and Issaoui (Prix Jebel El Oust, Gr2, Siliana, Gr2, Ben Ayed, Gr3 and Badr, Gr3). On arrival in the Gulf, the mare was bred to Zumurud (Dahman El Arami) who

raced in France as Tout An Khan. A quadruple winner on the French circuit, he also captured the Dubai Stakes at Kempton Park. This union yielded Al Sareeah (Zumurud) and she, in turn, was bred to a local stallion of French parentage, Musaed (Nénuphar Al Maury & Fiona de Nautiac). Nénuphar Al Maury (Baroud III), a full brother to the dam of No Risk Al Maury, was sold to Sultan Quaboos after making a winning debut at Dax when trained by his breeder, Renée-Laure Koch. A triple winner in France, Fiona de Nautiac (Guajaraz) then took the route which led to Oman. Falak (Amer), the sire of Bf Mughader, was born at the Al Shahania Stud, and he was the result of an all too common breeding, and namely that of the stallion Amer being bred to a French mare. Falak went on to win nine races in Qatar and Europe. The line which has yielded Bf Mughader has been a regular source of winners in Oman. However, according to the information available to us, he is the first to shine at this level abroad. 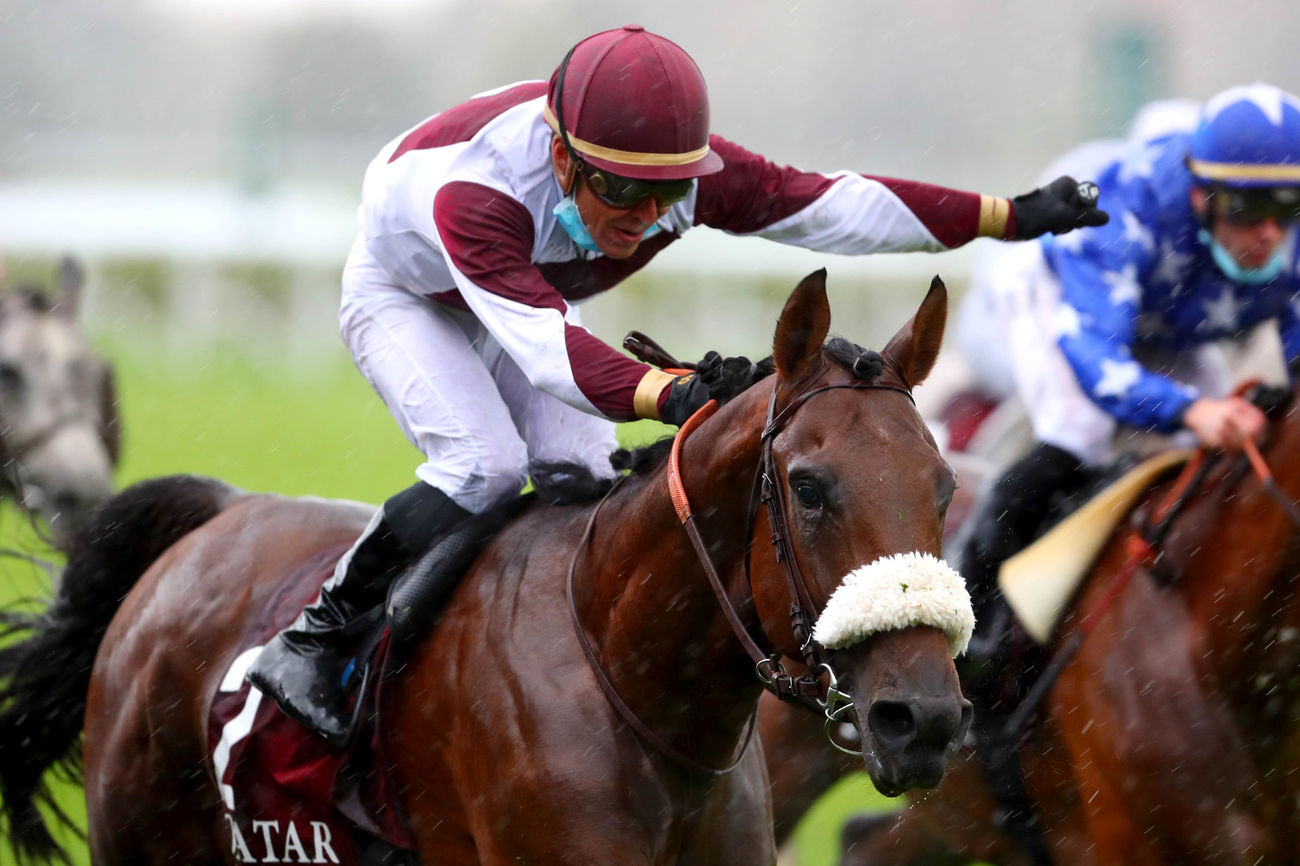