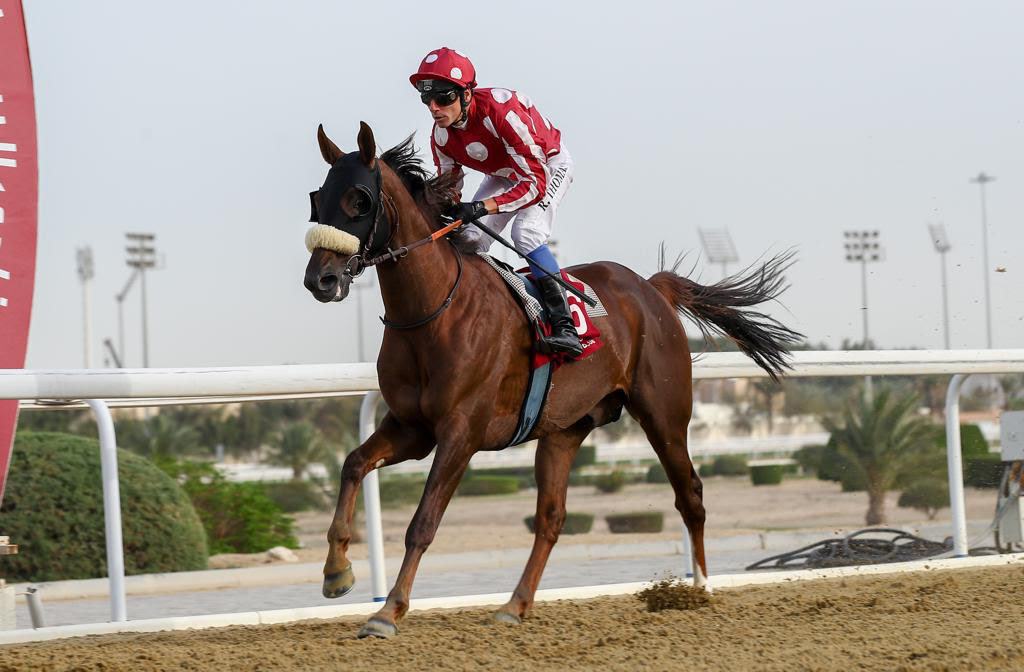 Following the win of his son AF Maher (AF Al Buraq) in the Dubai Kahayla Classic (Gr1 PA), AF Al Buraq (Amer) now forms part of a very exclusive club, having joined the restricted ranks of the living stallions capable of generating a winner of the Meydan feature. The Shadwell sire is based at the Haras de Saint-Faust and he joins a list which comprises Mahabb (the sire of Manark), Munjiz (the father of Al Mamun Monlau), and his full brother AF Albahar (responsible for AF Mathmoon). Saudi Arabia’s Al Hanouf (Sabaan) has to date been the only broodmare capable of generating two future stallions, AF Al Buraq and AF Albahar, which have gone to sire a winner of the Dubai Kahayla Classic. The two are French-based and AF Albahar covers from the Haras de Thouars. AF Al Buraq has already produced a number of Gr1 PA class performers and namely: AF Al Sajanjle (third in the Al Maktoum Challenge Round 2 and second in the Maktoum Challenge Round 2, Grs1 PA); AF Maqayes (third in the Liwa Oasis and the Bani Yas, Grs1 PA); AF Al Hazer (third in the Al Maktoum Challenge Round 3, Gr1 PA); and AF Tawaq (second in the Al Maktoum Challenge Round 3, Gr1 PA). The majority are out of French PA mares or those with extensive Gallic bloodlines. The first French foals of AF Al Buraq were born this year.

Dahor de Brugère makes an immediate impact via Traynah. Three young PA stallions will be the focus of particular attention in 2019 as a result of their progeny seeing the racecourse for the first time. We are referring to Dahor de Brugère (Dahess), Josco du Cayrou (Munjiz) and Al Mamun Monlau (Munjiz). The progeny of the trio filled the first three places in the Prix Massoud, the first race of the French season which caters for unraced PA horses. Traynah (Dahor de Brugère) proved victorious which ensured that her Al Shaqab Racing sire broke the ice with his first ever runner. Najiah (Josco du Cayrou) set the tempo whereas Traynah, pursuing a wider course, raced in fourth. Anthony Crastus called upon Traynah for an early effort and the filly wandered about a bit in the straight. However, she applied herself to the task in hand which enabled her to make up the leeway by catching Najiah. A secondary surge in the final 100-metres enabled her to nail the win by less than a length. Najiah was second. Al Hazm (Al Mamun Monlau) was a two lengths third. The Prix Massoud has acquired the reputation of being a race capable of producing one or more Group class performers each year, and we can draw on the examples of Fettah du Loup, Brama de Pompadour, Al Moujjalli, Cakouet de Bozouls and Abu Alabyad. After the above win, Mrs Jean-François Bernard said: "It’s very satisfying that Dahor de Brugère has been able to have his first winner. It’s always very gratifying to train horses either by stallions or out of mares which had previously been in the yard. I would like to personally thank the Al Shaqab Racing racing manager for sending me this very precocious filly. She had being showing up well at home two weeks prior to the race but, as is often the case, your confidence levels tend to dip on the day of the race itself when reports on the other runners start to emerge. She’s a small and very courageous filly – and has a very neat turn of foot." Even if he has been much less in demand than his fellow sires, and he was responsible for eight ‘French’ foals in 2016, half of Dahor de Brugère’s first crop are in-training. The progeny of the Al Shaqab Racing stallion are also the subject of upbeat reports. Two other members of the stallion’s production line are currently trained by Thomas Fourcy. Unbeaten in four attempts as a three-year-old, the sire enjoyed success in the Al Rayyan Cup - Prix Kesberoy, plus the Qatar Coupe de France des Chevaux Arabes (Gr1 PA), for trainer Jean-François Bernard.

first-season PA stallions who will particularly come under the microscope in 2019 as a result of having his first runners. To date, he has had only one runner, Al Hazm (Al Mamun Monlau). Third on his debut at Bordeaux, when still a bit green, he subsequently opened his account on his next start at Toulouse. This marked the sire’s first winner. In the Prix Denouste (maiden), the representative of His Highness Sheikh Abdullah Bin Khalifa Al Thani capitalised on a good start by making the running. Having been in cruise control mode, he quickly and easily put the race to bed after going clear under a hands and heels ride from Olivier Peslier. Guajok de Bozouls (Muguet de Pascade) was two lengths further back in second – in receipt of two kilos from the winner. Ghumran (Dahess), another to have raced at Bordeaux, was a close third.

Al Hazm was bred by His Highness Sheikh Abdullah Bin Khalifa Al Thani, having been with Éric Ventrou during the pre-training phase. His trainer Didier Guillemin said: "He ran well on his debut when third. We were disappointed to get beaten as he has always worked well at home. He has subsequently redeemed himself after showing some quality on the gallops. I think that he’s a colt with scope for improvement. He did it nicely and without his jockey having to resort to the whip. He is an attractive physical specimen with the size to match.”

Tabarak gets off the mark. Garraffah (Tabarak) provided his sire Tabarak (Nizam) with a first success after capturing a 1,900m maiden by 15 lengths at Doha on March 27th. After constantly being in the money, the four-year-old sluiced home by fifteen lengths! The winner has since followed up in a ‘second’ maiden over 1,700m race. Tabarak topped the 2013 PA International Classifications, and he currently boards at the Haras du Grand Courgeon. Garraffah was bred by His Highness Sheikh Abdullah Bin Khalifa Al Thani.