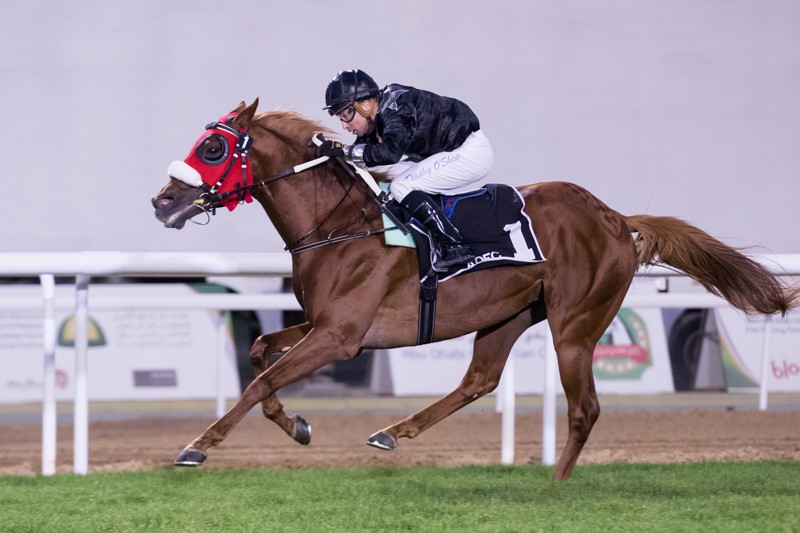 The win had been on the cards if recent signs were anything to go by. However, on March 1st,

Racing prominently is de rigueur. The hold-up PA horses came up short in the Liwa Oasis (Gr2 PA) which was run over 1,400m (7f) on the turf at Abu Dhabi. As the first four home had invariably occupied the first four places from the off! Having set the pace, RB Money to Burn appeared to have the race sewn up in mid-straight – that is until Af Alwajel came up on the inside to take her measure in the final strides. Hakeemat Muscat (Akim de Ducor) achieved a podium finish in third, as the reappearing Af Mathmoon (Af Albahar) was left to secure a highly encouraging fourth place after a three year absence. The multiple Gr1 PA winner, successful in the 2016 edition of the Dubai Kahayla Classic (Gr1 PA), looks sure to improve for the run.

Capable of having his sights raised. Winning rider Tadhg O’Shea said of Af Alwajel: "Ernst (Oertel) has always held the horse in high regard. He was coming off a second over

1,200m (6f), which is his minimum trip. The horse was a picture of good health in the paddock, which rendered my task a lot easier. He gives the impression that longer trips are within his compass. It is a privilege to be able to ride for Monsieur Nabooda. It’s going to be a tough choice as regards selecting which horse to ride in Kahayla. However, no matter what, he’s a horse on the upgrade, having raced just eight times during his career. He’s always been in the first three bar once. He is the real deal as regards being on an upward curve. He’s also very tough. The manner of victory reflected his Sharjah victory at the end of December when he headed the horse on the lead in the final strides. He has the ability to deliver a snappy turn of foot in the final 200m. I was reasonably confident of being able to peg back Fabrice Veron, the rider of Rb Money to Burn."

Hailing from the line of Berthe. Af Alwajel is a son of the Af Al Buraq (Amer), the