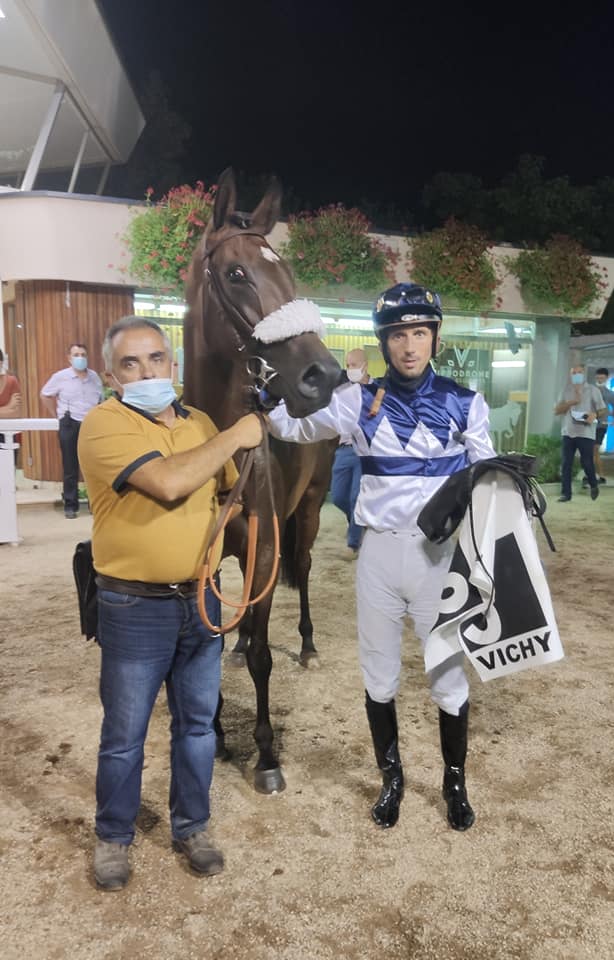 Shining the spotlight on the emerging talent during August

The 3-year-old races are the conduits to the top events. Here we give the rundown on these types of races run in France (stakes races excluded) during August. We will conduct a similar review of the September maiden races in our next issue.

Emberator and the imprint of Mathieu de Watrigant. Emberator (Munjiz) had to work hard to open his account in the Wathba Stallions Cup - Prix Dahman at Dax on August 4th. The chestnut carries the colours of Al Shaqab Racing. On the heels of the leaders, the Charles Gourdain runner slugged it out with the Thomas Fourcy representative, Nafe'eh (No Risk Al Maury), after drawing upsides that rival at the distance. On reaching the wire, just a short neck separated the pair. Sarhan (Mared Al Sahra), from the François Rohaut yard, was third. Despite finishing with a flourish, the latter failed to trouble the principals. Emberator lost his maiden tag at the third attempt, having constantly been upped up in trip. He was bred by Mathieu de Watrigant. A son of Zenhobie (Dormane), Emberator's grandam is a certain Djelifa (Djelfor). The latter has already yielded Djelmane (Dormane), the winner of the Al Maktoum Challenge Round 3 (Gr1 PA). He’s also a great-grandson of the highly influential mare Cherifa (Chéri Bibi), herself the source of a numerous winners bearing the signature of Jean-Marc de Watrigant. In addition to her Gr1 PA winning descendants, (Djebbel, Djelmila, Majd Al Arab, Djezika, Cherazade, Djourdan...), Cherifa was a sister of the very successful sire Tidjani (Flipper).

The young pretenders of the Élevage du Croate. A new chapter in PA racing got underway

at Vichy on August 15th . As it marked the first time that the ‘Bellerive’ track had staged racing for the breed. The Prix Djourman, run over 1,400m (7f), enabled Hajadie du Croate (Af Albahar) to lose her maiden tag. After biding her time at the back of the pack, she left her rivals standing in the straight after her power packed finish carried her over two lengths clear. It should be underlined that she was dropping down in class in the wake of her Prix Razzia III (Gr3 PA) third in July. Trained by Thomas Fourcy, she carries the colours of Nasser Saeed Al-Eida. The front-running Hidalgo du Croate (Al Mamun Monlau) just held second after repelling the thrust of Safaa (General).

Hajadie du Croate, in common with Hidalgo du Croate, hails from the breeding academy of Jacques and Eliane Davy-Boudet. She’s out of Topaze du Croate (Dormane), herself the dam of Farida du Croate (Munjiz). The latter made a successful introduction before filling third in the Prix Razzia III (Gr3 PA). D’Jadie de Teoul (Djouras Tu), the grandam, produced Djavius des Landes (Octavius): the winner of eight races in France, plus Opale du Croate (Dormane). The latter proved successful before only finding the star act, Al Dahma (Amer), too good at the highest level in Qatar. The runner-up Hidalgo du Croate is a great grandson of D’Jadie de Teoul.