Trainer Cornelia Fraisl has made a remarkable start to her career in Poland. In the wake of an exceptional 2020 campaign which entailed shaking up the local hierarchy…she harbours future ambitions on the international stage.

The Polish season ended on November 22nd. Cornelia Fraisl and her team were responsible for 44 winners, and the handler was a clear second in the trainers’ championship behind Adam Wyrzyk. Because of the Covid crisis the stable has shelved plans to race abroad, but she has her sights fixed on this objective subject to the situation improving next year. Born in Salzburg, Cornelia Fraisl admits that her initial introduction to horses was anything but a happy one. Her grandparents had a small farm and, when she was three-years-old, her father bought her a pony. She said: "It was your typical, stubborn Shetland pony…and, after biting the dust several times, I asked my Dad to sell the pony and buy me a guinea pig!" A further ten years elapsed before she turned her attentions to horses again. Consequently, she spent every moment of her spare time at a local trotting stable. It wasn’t until she moved to Vienna in 1996, after finding herself in the vicinity of a racecourse which staged flat racing, that she took the cue by pursuing her racing dreams. For it was then that she started to ride out regularly in the mornings prior to obtaining an amateur riders’ licence and buying her first racehorse.

From jockey to trainer. In her capacity as an amateur rider she recorded around 25 winners in Austria and Hungary. In 2006 she was granted a professional licence and has ridden 208 winners to date. Competing in the H.H. Sheikha Fatima Lady Rider World Championships also gave her the opportunity to ride in Britain, Sweden and Poland. She agrees that riding professionally has helped her transition to the training ranks and said: "It’s helped for sure and particularly when it comes to communicating with jockeys, and when it comes to finding the right tactics for individual horses. I still ride in some races aboard my older horses. I ride out most lots. This is the best possible scenario for me as it enables me to see the horses work, observe their behaviour, and to get a ‘feel’ for them."

The 2020 season marked Cornelia Fraisl’s first campaign as a public trainer in her own right as, for the last ten years, she has been assistant to her partner Michal Romanowski at their farm close to Wroclaw racecourse. However, she explains: "I’ve always had the freedom to make the decisions about the daily training regimes of the horses, as Michal mainly attended to the administration whereas I concentrated on the practical side of things at the stables."

She has also drawn from her experiences from working with trotters and with regards to interval training, feeding and general equine welfare. She also opined that a riding spell in Florida was a particularly useful learning curve on how to bring on young horses.

The importance of the mental aspect. Cornelia Fraisl is a firm advocate of social interaction between horses, who enjoy the freedom to communicate with each other via the medium of open-fronted stables. Elaborating on her methodology she said: "The experiences of recent years have shown me that only a happy horse will give its best in a race, and so we try to keep them happy and motivated. All our horses are turned out for several hours every day; fillies and geldings go out in small groups, whereas colts go out individually. Of course, it is much more work for our team in terms of grooming them when they return to stable, but, as our results prove, it’s worth it."

They use a variety of methods to keep the horses happy. In addition to using the ‘natural’ facilities afforded by their 1,400m (7f) and 2,000m (10f) training tracks, they also have option of boxing the horses to one of their 50 hectare fields. Here the natural gradients enables interval work to take place on grass. When it comes to fast work and bringing on young types, the horses are dispatched to Wroclaw racecourse. After their morning work, a nearby small river comes in handy as it enables the horses to cool off their legs. They also have a horse walker and purpose-built starting stalls so that the young horses can have a stress-free introduction to them. Cornelia Fraisl feels that these methods are paying dividends and added: "Horses arriving from other training stables have been transformed as they sample the joys of the paddock and the social contact that comes with it here on our farm. The country setting also helps horses experience something other than just training around a circular track."

She admits that some of the horses graduate to endurance contests after their racing careers are over, although that isn’t the aim. However, she does feel that that her varied training methods helps her horses adjust to their new careers. The farm is located in the south west of Poland where the climate is mild. A former state holding, it was acquired by the Romanowski family in 1999. They manage around 110 horses with the equine stock comprising a mix of broodmares, young horses, a few English thoroughbred stallions, horses-in-training, and pensioned-off horses blissfully living out their retirement.

Regarding their breeding programme Cornelia Fraisl said: "We have a small number of English thoroughbred and PA broodmares. I have eight Arabian broodmares of my own. It’s great to see the foals born and to follow their natural evolution which entails their first steps at the racecourse. I get very emotional when one of my “babies” wins!"

There are two English thoroughbred stallions on site and they cover a handful of mares every year. Although the PA stallion Vasyli Kossack (Marwan I), was sold to France last year as a producer of endurance horses. The Arabian broodmares derive mainly from French bloodlines, although some boast Russian and Polish blood on their distaff side, as denoted by the examples of Harbin (Eukaliptus) and The Wiking (Wiking).

Most of the 55 horses-in-training are PA horses, although they have a few thoroughbreds too, which compete on the flat and over jumps. Homebreds aside, the majority of their PA racehorses come from France, with a few sourced from Germany and Scandinavia.

The handler trains for a variety of European owners and is proud of the fact that the number of horses is growing continuously. At time of writing, only two of her owners are Polish, which she attributes to the fact that domestic owners are more inclined to trust the more established and experienced  trainers which are based at the racetracks.

A successful partnership forged with the élevage de Bozouls. Of those owners which have horses in the yard, Marcel Mezy, of élevage de Bozouls fame, has become the biggest. His four horse draft (February 2018) has expanded to 18 horses, and it reflects the partnership’s success which yielded 13 wins this season. They include Gatsby de Bouzouls (Muguet de Pascade), the leading 4-year-old in Poland for most of this season, although he eventually wound up fourth place in the rankings.

The trainer explained: "The co-operation is very good and, as a trainer, I could not wish for a better owner. A genuine horseman, he understands that not every horse is a racing type, that some animals need more time, and that injury can sometimes takes its toll in the sport. The horses that arrive on our farm have been well reared which makes it very easy for us when applying the saddle. Gatsby is a very special horse. You can’t force the issue with him. As you just need to keep him sweet so that he can enjoy his racing. He’s not easy to train and there are days when he tests his rider to the limit.  An extremely self-confident type, he’s conscious of the fact of being ‘special horse’, but once in his box he loves a cuddle as he searches for any treats which may be lurking in your pockets. Still on the upgrade, I believe he has yet to reach his full potential. I sincerely hope that he will stay in training for a few more seasons."

This horse has won three times this year which takes his career tally total to seven victories from 23 starts over trips ranging from 1,600m (1m) to 3,000m (1m 7f). He is the third and most successful foal of the unraced mare Bab Al Shams (Barour De Cardonne). His sire, the Prix Cheéri Bibi winner Muguet de Pascade (Tidjani), is based at the élevage de Bozouls. The latter is among Poland’s leading PA sires this season. The sire has been responsible for eight individual winners, all trained by Cornelia Fraisl, including Guarf de Bozouls (the winner of the Gr3PA Gdansk Cup), whose dam is Guarfie de Bozouls (Dormane). 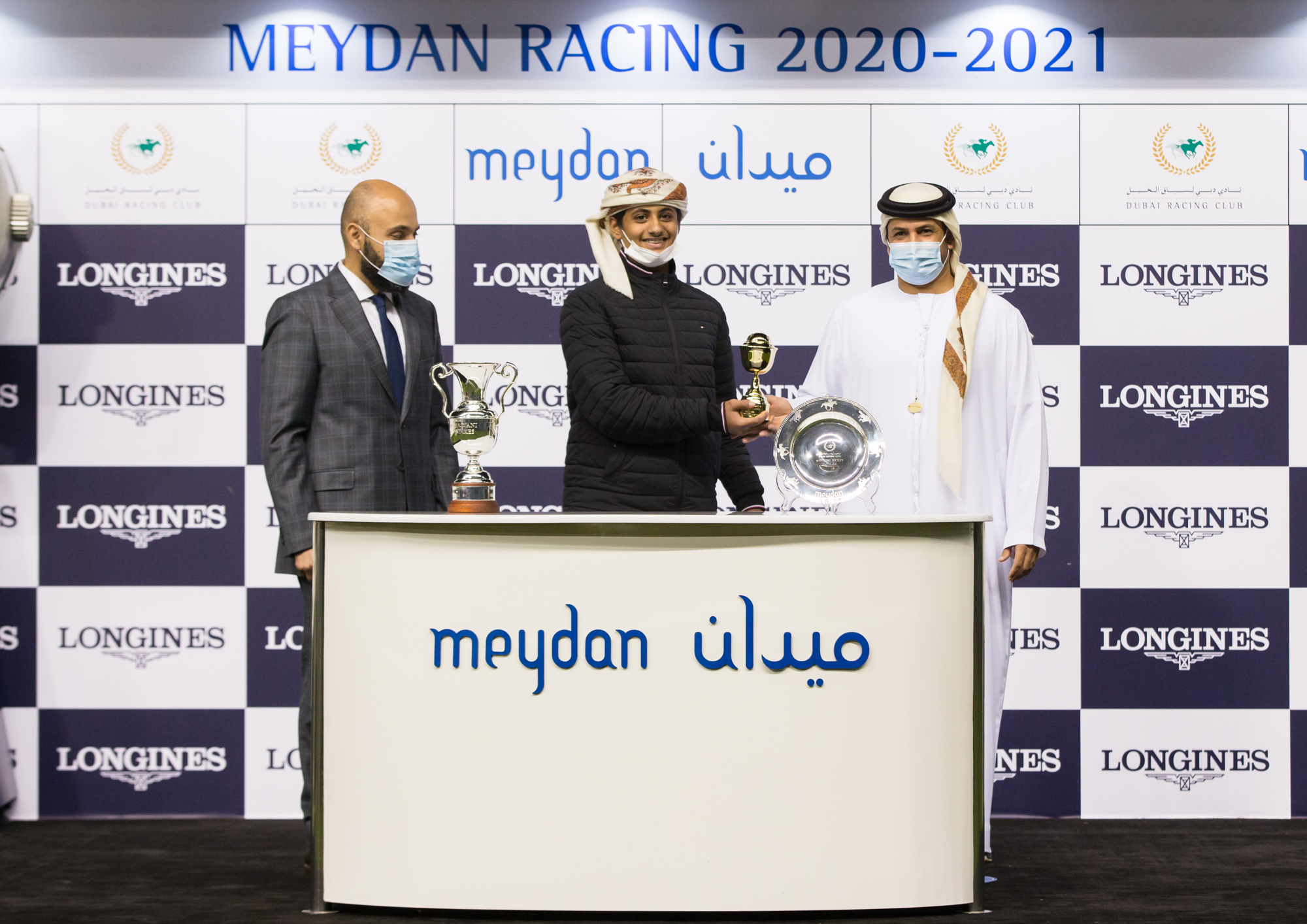