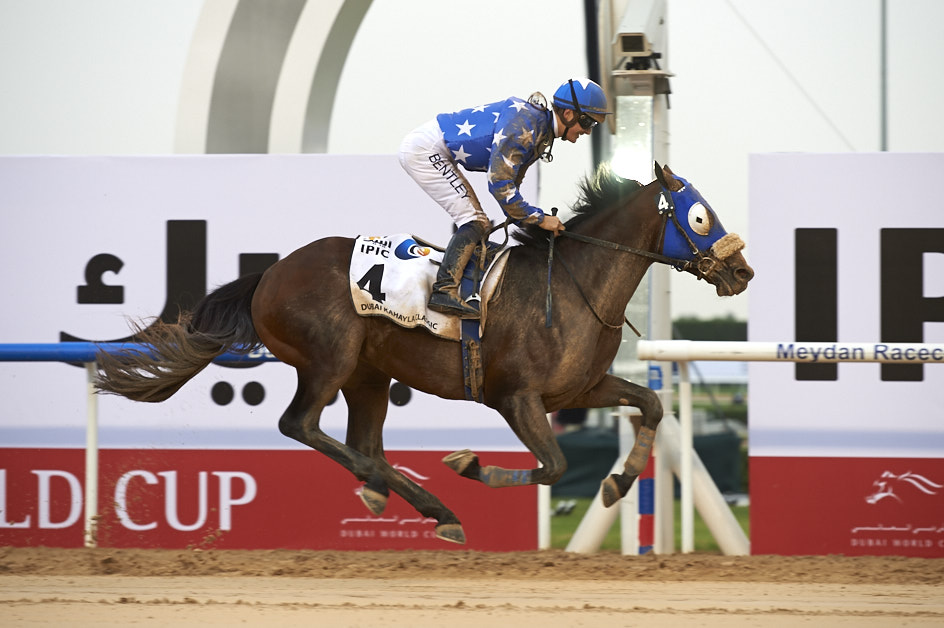 Surprise in the Dubai Kahayla Classic (Gr. I PA) with the great favorite Af Mathmoon (Af Albahar) being defeated. Reda (Burning Sand), a His Highness Sheikh Mohamed bin Khalifa Al Thani representative, finished in a rush to secure the victory. Still kept back in the middle of the home straight, Reda was placed in the middle of the track and made up several lengths under Harry Bentley’s saddle. 200m from the post, they took the advantage and won easily. Rb Burn (Majd Al Arab), took the second place. Sniper de Monlau (Câlin du Loup), the other good surprise of the race, finished well in order to be third. Handassa (Madjani) is fourth after a bad start. TM Thunder Struck (Majd Al Arab) and Faucon du Loup (Darweesh) are respectively fifth and sixth.

Invited lately in this Kahayla Classic, Reda had a victory on the sand in Doha, after a discrete 2016 season in Europe. Julian Smart, his trainer, said: “Better late than never [editor's note: referring to the invitation]. It is an outstanding performance and like I said, I couldn’t be sure of the way he would run today since it was the first time on the dirt. He wore small blinkers this time for the first time, and I think it helped him. But how he does it today, it reminds me of my other winners in the race, Jaafer (Amer) and Nez d’Or (Dormane) who had stumbled out of the gates before getting around the lot. Harry rode him very well and he always liked the horse. So I was happy to reunite them again.”

To see the race: https://youtu.be/CbOaiGQAAEQ

An exceptional start of 2017 for Al Shahania

Julian Smart wins this race for the third time after the successes of Nez d’Or (2002), Jaafer (2010) and now Reda (2017). The Al Shahania Stud trainer also won the Emirs' Sword 2017, the most beautiful race for Purebred Arabians in Qatar, with Ebraz (Amer).

On the dirt, the American bloodlines had to be highlighted. Reda is a son of Burning Sand (San Lou Romirz), top stallion several times on the other side of the Atlantic. This stallion is also the sire of the dam of Rb Burn, second, and TM Thunder Struck, fifth.