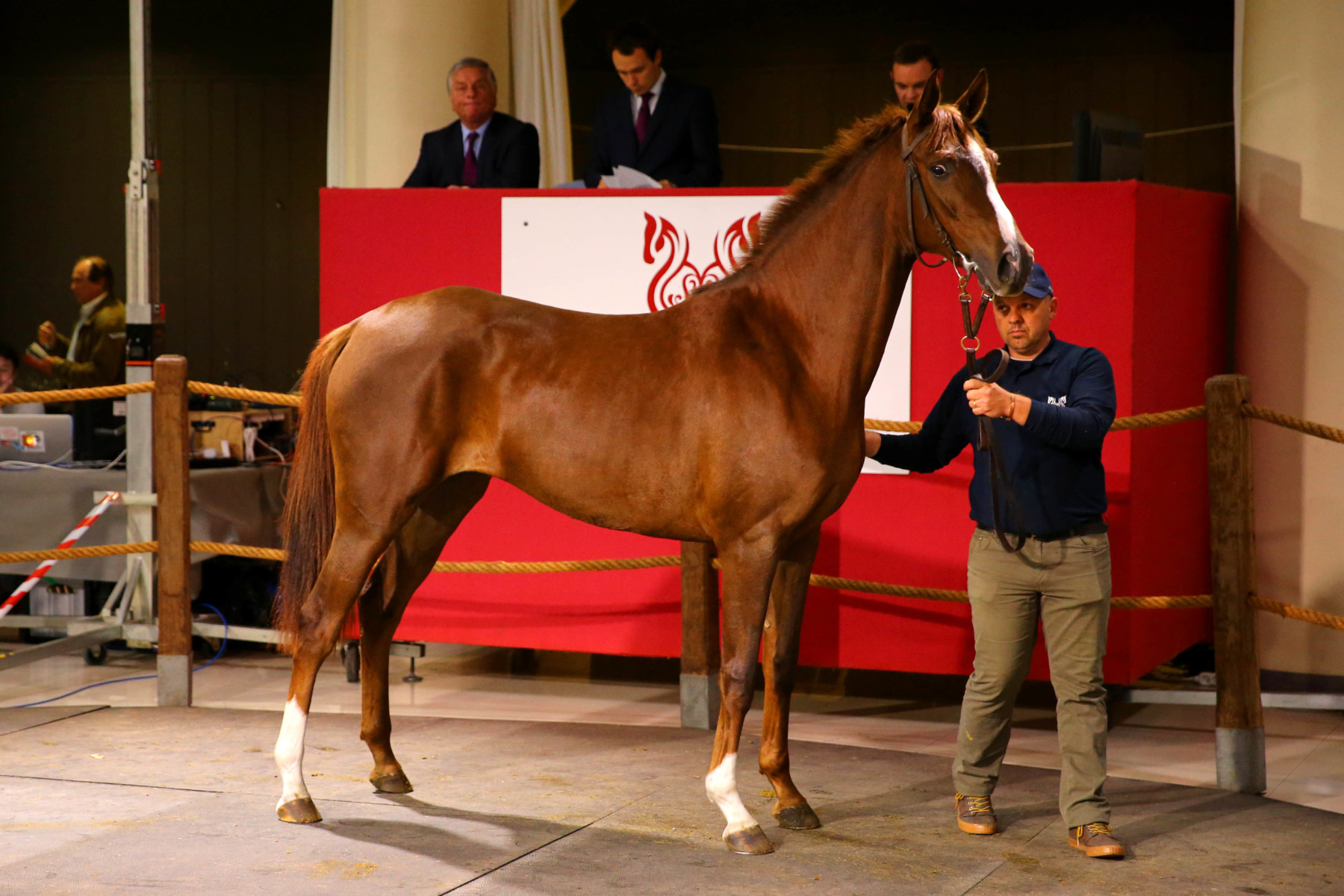 H.H. Sheikh Mansoor continues to invest in the descendants of Cherifa

Djedahes (Dahess) was the highlight of the bloodstock section. Consigned by Mrs Jean-François Bernard, the bidding quickly climbed to € 210,000. After a bidding war with Gérard Larrieu, it was Faisal Al Rahmani (Emirates Bloodstock) who signed the ticket. The mare came into this sale in foal to the young sire Al Mamun Monlau (Munjiz). “She comes from a lovely family, which has produced a lot of good winners, commented Faisal Al Rahmani. I have bought her for Yas, the racing and breeding operation of His Highness Sheikh Mansoor Bin Zayed Al Nahyan. I didn’t think that we would have to pay so much, but the market has spoken”. Her dam, Djesabelle (Dormane), won six races and finished third in the Prix du Président des UAE (Gr. I PA). She is notably the dam of Sahabba (Nizam), winner of the Sheikh Zayed Bin Sultan Al Nahyan Cup at Ostende (Gr. III PA), and second in the Jewel Crown (Gr. I PA) at Abu Dhabi. Cherifa (Chéri Bibi), the second dam, won the Dubai Stakes (Gr. I PA). She is the source of a dozen individual Group I PA winners (either directly, or through her daughters). Faisal Al Rahmani signed a ticket at € 95,000 for a yearling from the same bloodline.

At this sale in 2015, Gérard Larrieu purchased a certain Spaghetti (Snoopi), a homebred of Yves Plantin, consigned by Philippe Sogorb, who then went on to win two big races in Doha. This year, the agent came back to the same team to sign for Splasch (Njewman) at € 160,000. Still a maiden when the catalogue was printed, this 3 year old then finished a good second on his debut at Mont-de-Marsan on the 9th September, only beaten a head by a horse that then went on to run at Group I PA level. Gérard Larrieu commented: “There were very few horses in this catalogue that still had their racing career in front of them. This horse was coming off a good debut and should keep improving. I bought him Sheail Bin Khalifa Al Kuwari. He will go into training with Jassim Ghazali in Qatar”. The cross of Njewman (Djourman) over the bloodline of Verlize (Djelfor) has produced the Group winners Spleen, Skoop and Simmbad.

Al Jeryan Stud on a quest for good fillies

The sale began with the 2 year old section, where Mohanad Jassem Al Yaqout, acting on behalf of Khalifa Bin Hamad Al Attiyah, was very active, buying two fillies for a total of € 230,000. Folie du Paon (Mahabb) for whom he signed the ticket at € 130,000, was the top price of this section. She comes from the family of Group I PA winners, Pavot Al Maury (Manganate) and Nashwan Al Khalidiah (Tiwaiq). Consigned by Haras du Paon, she is a full sister to the multiple Group PA winner Nymphea du Paon. She was bred by Francine Poli, the partner of Sergio Raffaello. Mohanad Jassem Al Yaqout commeneted on her: “I bought her on behalf of Al Jeryan Stud. She comes from a lovely family. We came here to buy nice fillies, and we bought she was the best in the sale”. He then brought the hammer down at € 100,000 for the well bred Oiseau Lyre (Munjiz), consigned by Écurie d’Ossau. Her dam has already produced Divamer (Amer), winner of the Prix Tidjani (Gr. III PA) and second in the English Purebred Arabian Derby (Gr. I PA). Her sister foaled Motrag (Amer), winner of the Arabian Trophy des Poulains (Gr. I PA), and Jeyoosh (Amer), second in the Arabian Trophy des Juments (Gr. I PA).