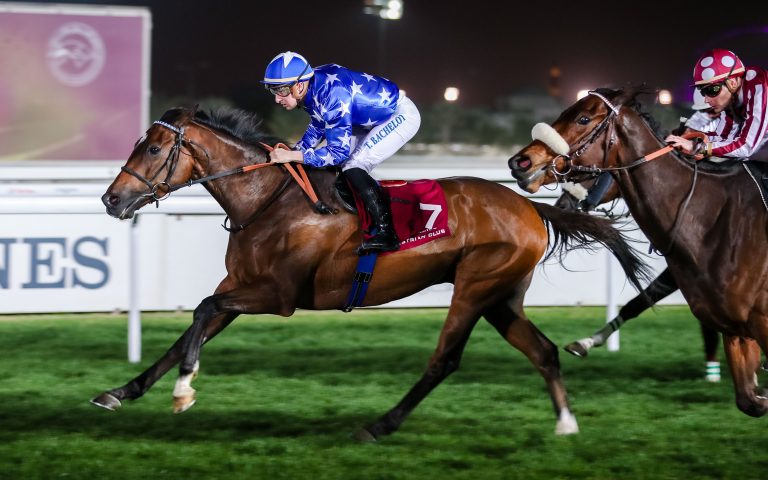 THE BIG INTERVIEW - THÉO BACHELOT: "I AM LUCKY ENOUGH TO BE RIDING FOR ONE OF THE BEST OWNERS

Second in the jockey’s table in Qatar on number of wins, the French native Théo Bachelot has been making a name for himself on the Arabian Peninsula for the Al Shahania stable.

The French Purebred Arabian. – How did you end up coming to Doha?

Théo Bachelot. – Initially it was Bruno Barbereau, Cristian Demuro’s agent, who had a contact with Al Shahania. Cristian was in Japan for the month of December, and so he introduced me to the management of Al Shahania. My agent then came in and suggested a three-month contract.

Is this the first time that you have been to Qatar?

Yes, in fact it’s the first time that I have been outside of France.

What is your impression of the racing in Qatar?

It is very high quality racing, and I have been lucky enough to ride for one of the best Qatari owners, who are also very well-known in France. I have ridden horses who have enormous potential. The tracks are good to ride, and the ground is quick. You have to adapt to a racetrack that is smaller than the Parisian racecourses, but I have found that easy to do, and I am lucky to be riding some of the best Arabian horses in the world. The quality of these horses has provided me with rides in some of the biggest races over here. It’s great experience for me.

As I began my career riding at the smaller provincial tracks in France, I haven’t had any trouble adapting to the racecourses here. The track is easily 1,800 meters round, with a 350, or maximum 400 meters straight, when the rail is out. These tracks encourage a lot of rhythm in the race, and you need to be up near the pace.

Have you ridden on both the tracks: the dirt and the turf?

Yes, but we tend to ride mostly on the turf which is nicer. On the dirt track, the selection is a lot tougher. The average horses cannot stand the pace, and the result is already obvious half way through the final turn. It is quicker than the turf track as it is shorter. You need a good position from the off, without lighting up your horse. It’s very tactical.

How is your collaboration with the Al Shahania trainer Julian Smart going?

I didn’t know him at all previously, and I was pleasantly surprised by the way that he trains his horses and manages his staff, and so I felt very comfortable here as I had confidence in him from the beginning. I am also very lucky to work with another French person, his assistant Rudy Nerbonne. That made it a lot easier for me to adapt. Julian is quite easy to get on with. The success I’ve had has helped. He has a good team and good horses. He has given me a lot of freedom and he is straightforward in the way that he works. I am learning from him and I appreciate that. It has been great to get to know him. His training methods are similar to those of my boss, Stéphane Wattel. The horses are well trained. They are trained in a well managed environment. I enjoy riding here as the horses are in very relaxed surroundings. It’s very beneficial for them.

Had you ridden a Purebred Arabian before this trip to Doha?

No, not really. I had a tiny bit of experience riding in Tunisia which went fairly well, but the quality of the horses in Qatar is far superior.

I think that working with Purebred Arabians is very different to working with Thoroughbreds. However, in the end they are trained the same way. The morale of Arabian horses is a lot more important. I did have to change the way I ride races though. Nonetheless, the best Arabians are very similar to Thoroughbreds.

Do you think that it is an asset to a jockey’s career to know how to ride these horses?

Yes, I really think so. I didn’t have any previous experience with Arabians to work off. Now I know how they react and I can put that knowledge to good use in the future. It comes partly through feeling and being able to adapt your riding style. However to have the opportunity to ride horses such as Ebraz, Yazeed or Gazwan in the mornings only helps you to improve, and Julian knows them inside out. You get a great feel from them, and a bit of pressure as well!

And you also won the Oaks?

Yes, we beat some good fillies with Majnona (Amer). She then ran very well in a handicap under a big weight. She is one of the best older mares in Doha. She should run again here. I also won with Shabah, the brother of Gazwan. He won on his debut on the dirt with Alberto Sanna. He then won twice with me, also on the dirt, and stepping up progressive in trip. He is a serious horse in the making, even if he needs to climb a few more rungs on the ladder.

Are you still riding Thoroughbreds?

Yes, and some of them have been running very well. I won onboard Oryx who was previously in training with Philippe Sogorb, and he has won two handicaps in good fashion. Al Shaman came from Mikel Delzangles’ stable and he is unbeaten from two starts. We think a lot of him. I recently won with Off He Goes, an Australian bred colt, and Kynoch, a 3 year old who arrived here last year.

I came to Qatar for a top owner, who has a lot of high class horses. That opened the door to the big races. I am delighted to have won a big race at the end of the season.

Are you aware that you are a talking point in France right now?

I have been very lucky. I came here to horses that were ready to run, and so I won quite a lot of races. As you know, it’s a little under a dozen years since I started riding. I had my best ever season in France last year. I arrived here in good spirits and with a good mentality. It worked, as I didn’t have any pressure and I was able to ride with confidence. That’s always enjoyable. I am due to return to France after the big races at the end of the month. I will probably be on a plane by the 25th February.

Have you some exciting prospects in France this year?

I had a very good season in 2017 for my boss, particularly with some good 2 year olds. I hope that they will make the step up to 3 well, but there’s no reason why they shouldn’t. Particularly some of Jean-Louis Bouchard’s horses, such as Sacred Life, who should have run in the Group I [editor's note: Critérium International] on the day of the strike at Saint-Cloud. That left a bit of a sour taste, but I hope that he hasn’t lost anything for it. I am very happy as my boss is quite proud that I have had success abroad. It wasn’t very easy for him, nor was it for me, when I left in December, as we have always had good results at that time of year. These are the choices however, and I have no regrets. I had sometimes asked myself whether I should leave or not. I said to myself that it could only be a good experience to see something new, another way of racing. It also helped my morale to break my usual winter routine.

HIS BEST RESULTS IN FRANCE