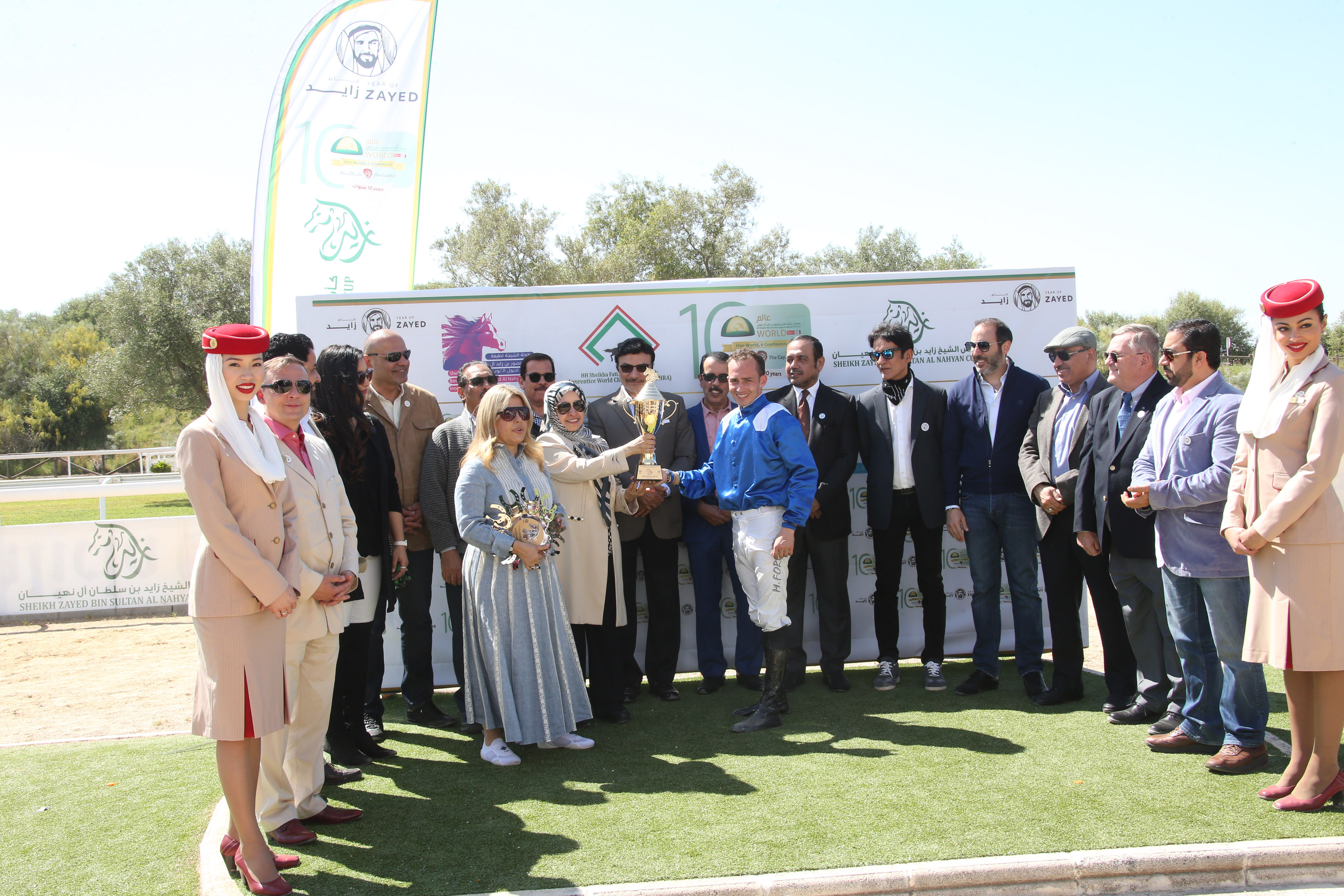 The May 5th meeting at Seville coincided with the 100th anniversary of the birth of the founder of the United Arab Emirates Federation: Sheikh Zayed Bin Sultan Al Nahyan. It also staged some Purebred Arabian races, and notably the 100 Years Sheikh Zayed Bin Sultan Al Nahyan Cup (Listed PA). The recently renovated track was inaugurated on April 12th. Roberto Cocheteux Tierno is the driving force behind the track and, under his aegis, the Gran Hipodromo de Andalucia has embraced a new dynamic. This aims to broaden the appeal of racing by creating the vocation within Andalusia whereby the horse is an integral part of local culture. The colours of Roberto Cocheteux Tierno are well known in France. He has had several good horses with Xavier Thomas-Demeaulte, including Spain Burg (Shadwell Rockfel Stakes, Gr. II).

THE HISTORIC WIN OF AJAAYIB

This was the very first black type race for Purebred Arabians to be run at the track in an event organised and coinciding with the Sheikh Mansoor Bin Zayed Al Nahyan Festival. Run over 1500-metres of the sand track, the race attracted a field of ten, including several French runners. Fourth in the French Arabian Breeders’ Chalenge pour Pouliches (Gr. II PA) last year at Toulouse, Ajaayib (Mahabb) asserted in the final stages by just over three lengths.

The François Rohaut runner, owned by Sheikh Hamdan Bin Rashid Al Maktoum, beat her compatriots Al Naama (Majd Al Arab) and Al Shamoos (No Risk Al Maury). The second and third, also French-trained, are respectively with Thomas Fourcy and Charles Gourdain. The well-bred Ajaayib was gaining her second career win on a surface she had never previously raced on. A delighted François Rohaut said: "We didn’t hesitate when it came to making the trip for this stakes race. Especially, as on paper, she was very much the one to beat. It’s good that she confirmed this and is a well-bred mare with looks to match. We plan to keep her to this distance as I don’t think that she cares to go further. In any case, today she was perfect. The fact that she has taken to sand will perhaps provide additional options further down the line, and notably abroad."

THE SIBLING OF THE CHAMPION MURAAQIB

Ajaayib is a well-bred half-sister to Muraaqib (Munjiz). The latter won six Group I PA races, including the world’s richest race for Purebred Arabians at Abu Dhabi last November for the same owner-trainer combination. Her dam, Tashreefat (Bengali d’Albret), was second in the Liwa Oasis (Gr. I PA), and has produced Barnamaj (No Risk Al Maury). The latter was second in the Jebel Ali Racecourse Za’abeel International Stakes (Gr. I PA) at Newbury.

Earlier at the same meeting, the French trainer Charles Gourdain enjoyed his moment in the sun following the impressive win of his colt, Al Mah’Youb (Dormane), in the fourth leg of the Sheikha Fatima bint Mubarak Apprentice World Championship (IFHRA) over 1,900 meters. Belgian apprentice Sanne de Ceulaer was in the saddle. The Thomas Fourcy-trained Al Neksh (Amer) and another Gourdain runner, the unraced Haramil (Amer), were second and third.

Charles Gourdain told us: "I was keen to give Mah’Youb a confidence booster, as he had previously had a hard race prior to being acquired by Omani interests and joining my stable. This race was an opportunity for him, even under his 63 kilo impost, as he was going down in grade. I noticed that he acted well on sand in the morning and didn’t hesitate to make the trip. Haramil is a very backward type ad I’m lucky that his Omani owner has made allowances that the brother of the classy Nafees needs time. He’s laid-back in the mornings and his latest workouts have been in blinkers. It was the opportunity for him to make his debut at a lower level. He ran well despite not enjoying the best of runs. We await the confirmation. Finally, the third place of Al Shamoos in the Listed race was a nice surprise. In common with Al Mah’Youb, she’s had some tough races. I was seeking an easier opportunity for her, and with the exception of Ajaayib who was in a class of her own, she clearly had the ability to make her presence felt. She ran a courageous race and could even have finished second had she not been hampered in the bend."

A DAY TO REMEMBER AT A NEW AND VERY LOVELY SETTING

Charles Gourdain hasn’t hidden the fact that he is very taken by the Seville track: "Seville is a magnificent city and the racecourse of Roberto Cocheteux has a lovely decor and been well renovated by his daughter". The parting shot of the Pau trainer stressed "the commendable initiative of the team behind the Sheikh Mansoor Festival driven by executive director Lara Sawaya." 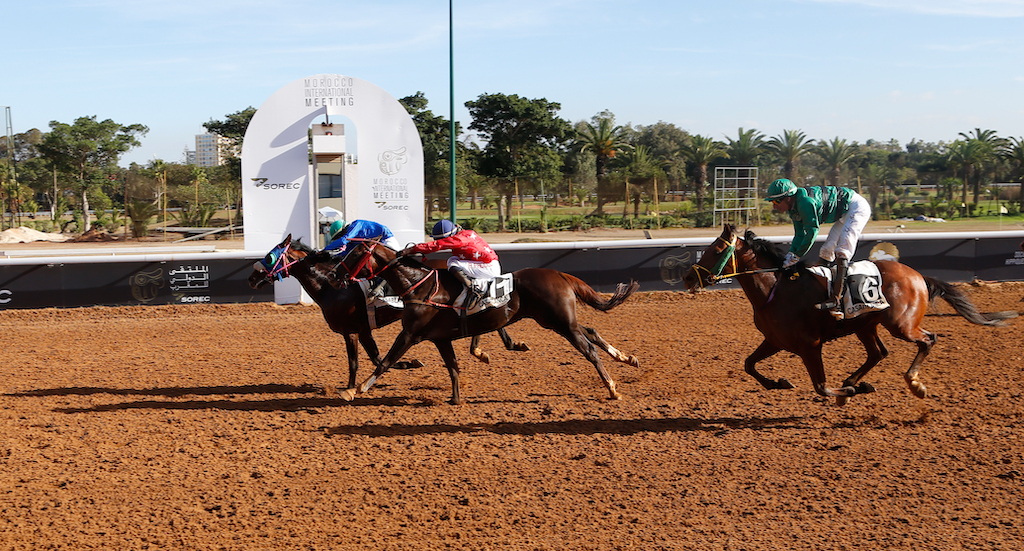 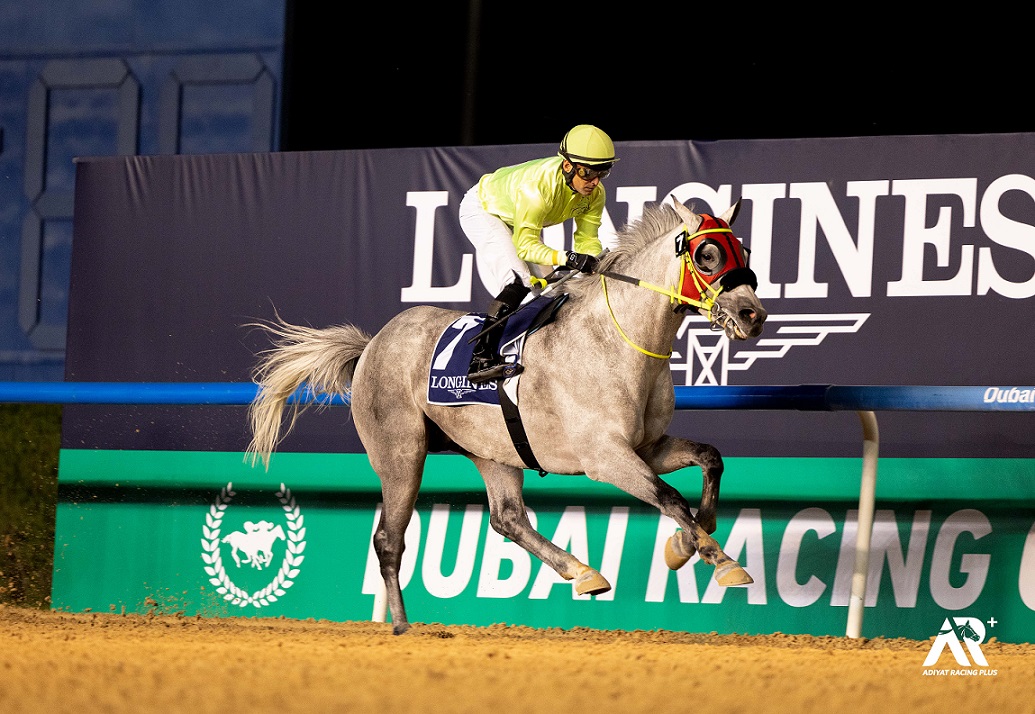