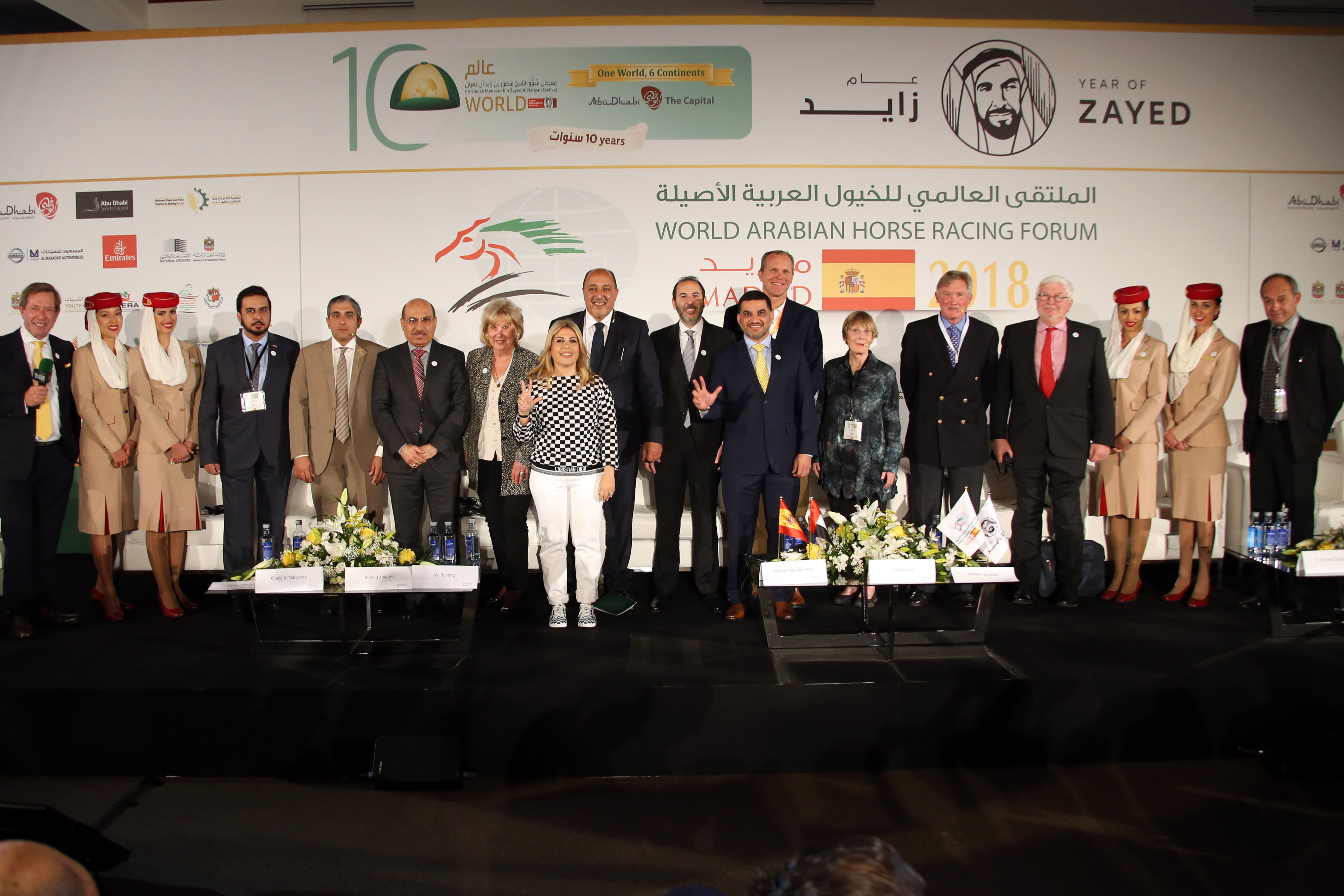 THE NINTH WORLD CONFERENCE OF THE RACING PUREBRED ARABIAN

The Spanish capital hosted the ninth World Conference of the Racing Purebred Arabian from May 1st to May 4th. Under the patronage of His Highness Sheikh Mansoor Bin Zayed Al Nahyan, almost 400 delegates representing 80 different countries attended workshops relating to subjects such as breeding, nutrition and the role of the media.

JOCKEYS’ WEIGHTS AND THE NEED FOR INSURANCE

Richard Mullen, in his ambassadorial role regarding representing the Festival of Sheikh Mansour, underlined the usefulness of the work undertaken by John Moores University. He said that this body has been instrumental in changing the attitude of a number of his weighing room colleagues in relation to the notion of 'having to make the weight'. As a result, many jockeys have adopted a more professional approach to nutrition, and in line with what we come to expect from athletes. Dr. Jamal Hout summed this up in a nutshell with the phrase: “What to eat and how to eat it.” Emphasis was also placed on the benefits of minerals and vitamins as regards enabling jockeys to maintain a stable weight.

Having had a leg amputated as a result of an accident, South African trainer Ernst Oertel stressed the need for good insurance cover. The jockeys Xavier Ziani and Richard Mullen added that the nature of their profession made obtaining adequate cover from the insurance companies difficult. Many opined that stable staff, and not only jockeys, should enjoy the twin benefits of full and lasting insurance cover.

THE URGENT NEED FOR THE HARMONISATION OF THE RULES

Even if jockeys are able to familiarise themselves with the racing rules of different countries via the internet, there is a feeling that rules regarding the use of the whip, fines and suspensions need harmonising. Numerous delegates asked the International Festival of the Racing of Arabian horses of Sheikh Mansoor Bin Zayed Al Nahyan, and the International Federation of Arabian Horse Racing Authorities (IFAHR), to undertake work in this direction. The vet Stephano Danieri pointed out that the use of the whip doesn’t impact negatively on a horse’s physique. In the absence of proof to the contrary, numerous delegates suggested the starting point of what is seen as a necessary standardisation of the rules should revolve initially around the use of the whip.

ALL ROADS NOW LEAD TO ROMANIA

The conference ended with the traditional handing over ceremony and the announcement regarding the next country which will host the conference in 2019. After Abu Dhabi acted as the very first host, the event has done the rounds after taking in The Hague, Berlin, Toulouse, London, Warsaw, Rome, Marrakesh and Madrid. Bucharest now takes over the baton regarding staging the tenth edition of the conference, when the finest experts in the domain of Purebred Arabians will converge in the Romanian capital next year.