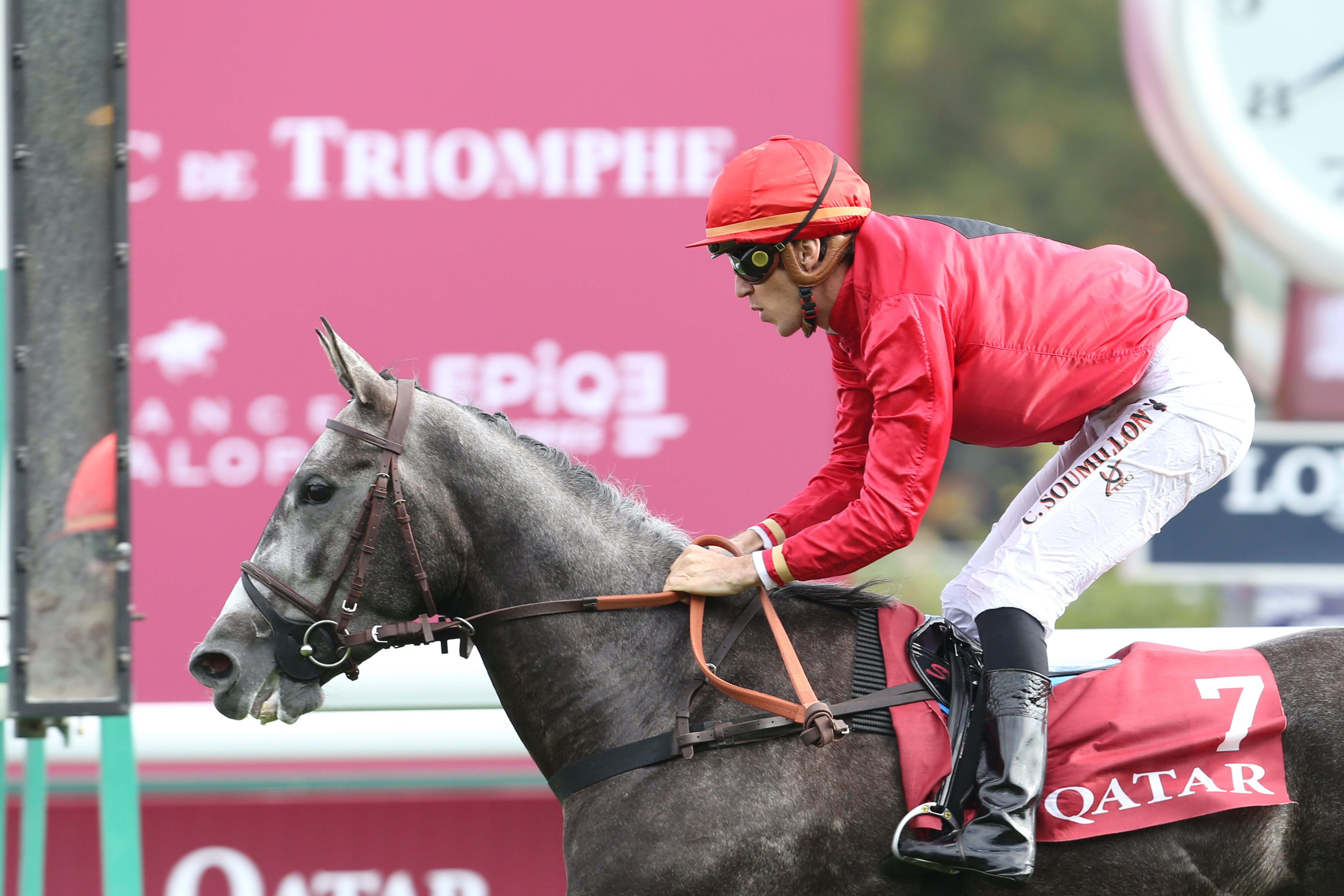 Al Shamoos (No Risk Al Maury) delivered an impressive performance in the Qatar Arabian Trophy des Juments - Pouliches de 4 ans (Gr. I PA). It also enabled the breeding operation of Mohammad Al Nujaifi to savour a second consecutive success in this race. For the record, the majority of his broodmare band are based in France. However, his story is a heart-warming one as, despite the problems afflicting his native Iraq, he has continued to showcase, and believe, in his bloodlines. A buy-back at the sales, Al Shamoos exuded class by giving her trainer, Charles Gourdain, his fourth Group I PA success of the season. The handler clearly continues to enhance his reputation in the PA sphere. The victory also has ‘breeding’ implications, as the winner is devoid of the more prevalent modern bloodlines which are also the dominant ones.

A cut above the rest

The presence of Wadeeaa (Mahabb), one of three runners carrying the colours of Yas Horse Racing (His Highness Sheikh Mansoor Bin Zayed Al Nahyan), ensured that there was a good tempo. Joudh (Mahabb) tracked the pacesetter with Al Shamoos handily poised in the slipstream of the latter. In the straight, Wadeeaa kept on gamely but she had no answer to the superiority of Al Shamoos, whereas Joudh stuck her neck out and never flinched the issue. Belqees, having tried to get on terms with the principals, found herself outpaced. Al Shamoos cruised her way to a five lengths victory over Joudh, as the latter outbattled Wadeeaa for second. Despite having ground to make up in mid-straight, Shomoos Athbah (Burning Sand) finished with a flourish, in the thick of it, to take fourth. Belqees backtracked into fifth.

Al Shamoos can occasionally turn on the style, and notably at Dax, where she powered home by fifteen lengths. However, she is also prone to running the odd ‘howler’ which has been attributed to an aversion of having other horses ‘around’ her. Aware of this, Christophe Soumillon tailored his riding tactics accordingly. Despite a wide draw, Soumillon was able to place the filly in a handy position close to the pace. He said in the post-race interview: "When I realised that the filly on my outside was making a beeline for the lead, my reaction was that it was essential to capitalise on this. Therefore, we were lucky enough to be tracking the favourite. I had hoped that the pacesetter would hang onto the lead for longer on hitting the straight. However, she weakened very quickly and we were soon in front. Charles Gourdain had told me that the filly tends to get unsettled as a result of having other horses around her in a race, but that wasn’t the case once she got her head in front. Today, she showed a lot of class. Her trainer said that she is in the very top bracket and I think he is right."

Charles Goudain and his annus mirabilis

After the successes of Nafees (Shadwell Dubai International Stakes, Gr. I PA) and Rodess du Loup (the winner of the English Derby and French Derbies for Four-Year-Olds, Gr. Is PA), the Pau trainer notched his fourth Group I PA of the campaign. He said: "We’re lucky enough to have three very good PA performers in the stable. Al Shamoos continues very much on the upgrade. She is a small filly but her lack of physical presence is compensated for in terms of heart. I was worried that she would be frightened by having other horses around her during the race as it has had a negative impact in the past. However, we have been working very hard on ironing out this problem at home. Christophe Soumillon rode her perfectly and the filly wasn’t inconvenienced. Thanks to the fillies of Sheikh Mansoor, the race was run at a good gallop. She therefore ran very well and, clearly enjoyed herself, before finishing very strongly. I also believe that there was plenty left in the locker. Yet there’s no escaping that she isn’t an easy filly although her work in the mornings is very good. Happily, she is maturing on the right lines and that is a trait associated with good horses. We are aware of her quality but her performance has exceeded expectations. She made her debut in Sweden, which was a winning one, but life initially proved to be difficult for her on returning to France. The filly was then given a break at a stud before returning to training and racing at Seville. Sheikh Tahnoon Bin Zayed Al Nahyan acquired the filly last week after her breeder Monsieur Al Nujaifi decided to sell her. She will leave France with a view to taking up residence in the United Arab Emirates."

Joudh (Mahabb), a triple Group I PA winner, was second. Her trainer Didier Guillemin said: "Joudh ran very well. She proved to be somewhat phlegmatic in addition to being a bit of a rascal and not very willing. She has a bit of temperament but, despite this, still managed to do her best work in the straight – even if she was well beaten. We had planned on running her in Dubai but could also end up by running her in Toulouse as well. Nothing is yet decided." Wadeeaa (Mahabb) (third) and Belqees (Mahabb) (fifth) are in the same ownership as Joudh, although both are trained by Xavier Thomas-Demeaulte. He said: "Waldeeaa ran very well and took the lead as she was smartly into her stride. It’s best for her to race handily as she can pull if held up. I wasn’t sure that she would stay the trip. However, she has done well. She is entered in a race at Abu Dhabi and could well make the trip. We adopted different tactics with Belqees by playing the waiting game. They are two fillies in the same ownership and, allowing them to jostle for the lead, made no sense. She, perhaps, had a harder race than Wadeeaa at La Teste. She has an entry at Toulouse at the end of the month, but we will see how she comes out of the race."

More than a hint of regret

Shomoos Athbah (Burning Sand) acquitted herself well in fourth. Her trainer Philip Collington said: "The filly ran well. Alas, she didn’t see as much daylight as the other fillies, who were blocking her in a little. She sustained her effort to the wire and her jockey felt that she could have finished nearer – perhaps even second. She could go for the Sheikh Zayed Bin Sultan Al Nahyan Jewel Crown (Gr. I PA) if invited."

The Al Nujaifi ‘breeding’ academy on the crest of a wave

Al Shamoos was bred by her previous owner, Mohammad Al Nujaifi, whose racing interests are managed by Val Bunting. The Iraqi owner-breeder was tasting a second consecutive success in the Qatar Arabian Trophy des Juments after the 2017 victory of Muneera (Dormane). Accompanied by his son, he said: "It certainly marks the first time that two daughters out of the same broodmare have captured successive editions of this Group I PA race.

We must congratulate the trainer, Charles Gourdain, and the filly’s new owner Sheikh Tahnoon Bin Zayed. She is now heading to Abu Dhabi where I hope that she will continue to shine at the highest level. The wins of Al Shamoos and Muneera are indicative of the high quality of Iraqi bloodlines. This family is capable of producing performers which act in all types of ground, including dirt. Al Shamoos impressed us and it’s a stroke of good fortune to have bred her."

Al Shamoos was a € 35.000 buy-back at the Saint-Cloud sales as a juvenile. Her dam, Hamiya (Al Hasim), won ten races in her native Iraq, including the local 2,000 Guineas and The Farewell Cup (Gr. Is PA). At stud, she has produced three black type performers including Muneera (Dormane): the 2017 winner of the Qatar Total Arabian Trophy des Juments (Gr. I PA). Hurra (Asad Saif) also did her proud by taking second in The International Ifahr Trophy (Gr. II PA) at Istanbul, as well as finishing third in The Hatta International Stakes (Gr. I PA) at Newbury; without forgetting the Swedish Group placed Al Haail (Elios de Carrère). Al Karta (Zad Al Rakib), the grandam, won eight races in Iraq including The Iraqi Jockey Club Trophy (Gr. I PA). She was second in the local versions of the Derby and 2,000 Guineas (Gr. I PA).