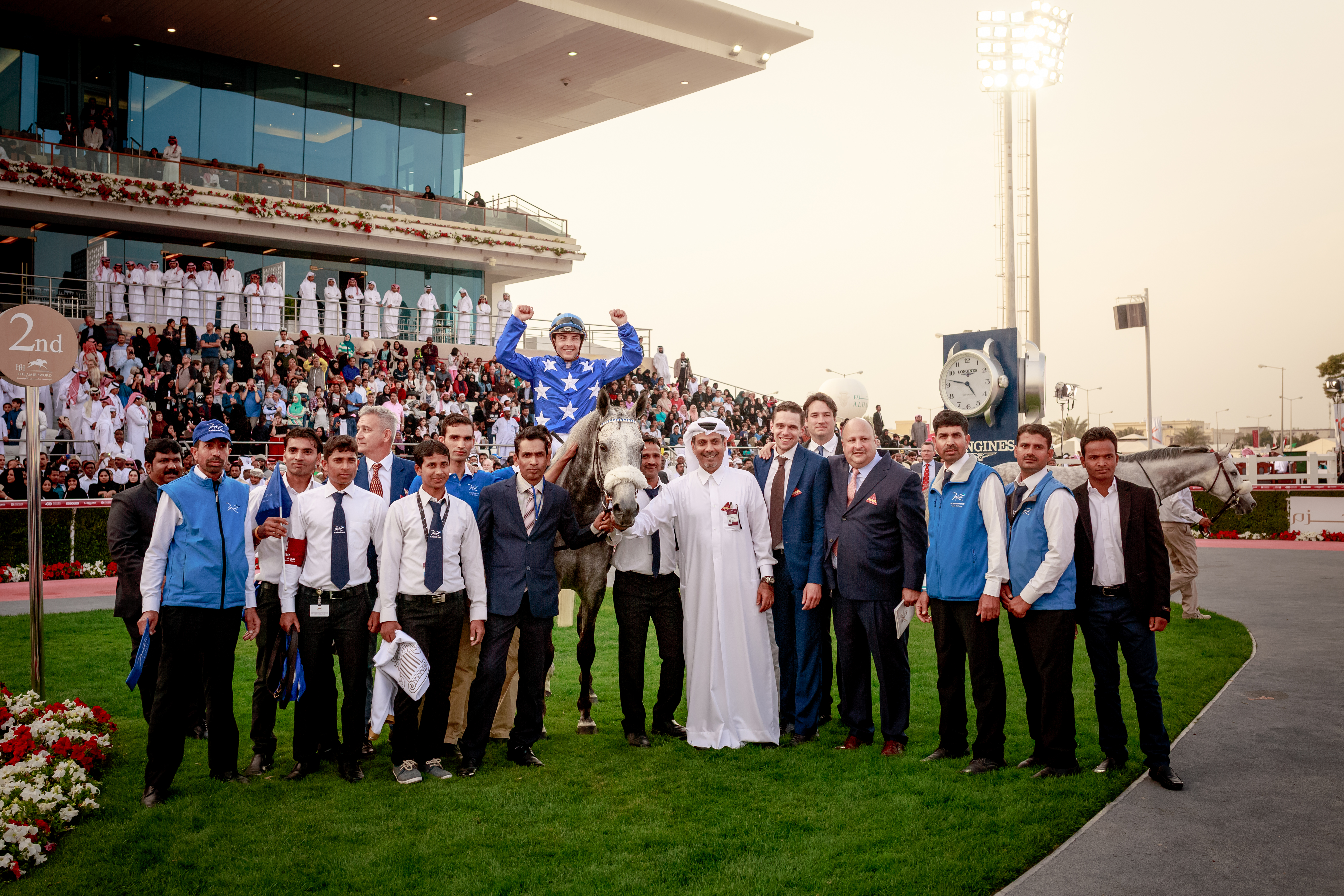 His first win in The Emir’s Sword (Gr1 PA) in 2017 had created a big impression. However, ever since then, Ebraz (Amer) has lived in the shadow of Gazwan (Amer): a dual winner of this race and the Qatar Arabian World Cup (Gr1 PA). It’s clearly not easy to occupy the neighbouring box of the best PA horse in the word. Yet, on February 24, it was Ebraz who hogged the limelight after depriving Gazwan of a historic treble. At the age of six, he reaffirmed his big ambitions at a time when his older stablemate has reached his eighth birthday.

The best horse on the day. The Al Shahania Stud pacesetters certainly completed their mission. That is before the Olivier Peslier-ridden Yazeed (Munjiz) took over in the bend – a point of the race at which Gazwan and Ebraz still languished off the pace. In the straight, Ebraz’s superiority brooks no discussion. For he proceeded to take the measure of Gazwan in no uncertain manner, and then that of Yazeed: giving the impression that he was doing it all very easily. Yazeed was three-quarters of a length away in second with Gazwan a close third: a place in front of Tayf (Amer).

Al Shahania Stud is still at the top of the tree. Julian Smart numbers seven training successes in The Emir’s Sword, and he is fast approaching the record of Alban de Mieulle (nine wins). His runners have cleaned-up in the last four editions which means that His Highness Sheikh Mohammed Bin Khalifa Al Thani has now won the race on 14 occasions. Julian Smart told us: « The pressure has eased. It’s a massive weekend of racing but the pressure which I put upon myself is huge. As this race is THE (PA) RACE which counts the most in Qatar and the expectation levels are huge. It has real relevance when the considerable quality of the Al Shahania Stud operation is taken into account. Gazwan has won the Emir’s Sword twice and Ebraz has also become a dual winner of the race. It’s a remarkable feat and, perhaps, one or the other will go on to collect for an unprecedented third time in 2020. Ebraz again showed all his quality. He had no luck in the 2017 edition when he finished very fast but too late to overhaul Gazwan. This year, Maxime Guyon didn’t even have to resort to the whip and that’s the way to ride him - with kid gloves. »

The future of Gazwan will be determined in a month. The question regarding the possible retirement of the beaten favourite, Gazwan, has arisen in view of the fact that he is now an eight-year-old. His handler added: « As things stand, he is being aimed at the Gold Sword in a month’s time. Should Gazwan contest that race, it will probably mean that he will be ready for the milestones of the 2020 season. As the case may be, he is very likely to be a stud. However, his physical strength and general well-being should enable him to remain competitive. » Concerning his PA hopes of the future, Julian Smart added: « Annan (Jaafer ASF), a winner over a mile this weekend, should be capable of tackling longer trips. Maxr (Jaafer ASF) disappointed yesterday but is deserving of a reprieve. He’s one for the future. It’s also the case with Taish (Jaafer ASF) who surprised us yesterday. She was beaten by a very good horse in the form of Bin General (General). »

Preserving the Emir’s Sword as a 2.400m race. The only big international race over 2.400m for Purebred Arabians, the distance of the Emir’s Sword could be subject to change in the future. There has been a clamour in certain quarters to reduce the trip to 2.000m in order to attract bigger fields. Julian Smart elaborated: « When a stable is dominant to such an extent, the temptation is considerable when it comes to changing things. However, I don’t think that this is a good idea as the unique and original character of this race needs to be maintained. I’m campaigning for the race distance to remain 2.400m, as is the case with the Prix de l’Arc de Triomphe or the Epsom Derby. There are races for horses which don’t stay 2.400m. In order to maintain the diversity of the international programme, the Emir’s Sword must continue to remain the great stamina test which it is now. It was the case here that the best horse won on the day. Yes, it could be pointed out that the field wasn’t a big one. However, quality [fields] are invariably a feature of the race. By shortening the race’s distance, bigger fields will become the norm but it’s not sure that the quality will appreciate at the same time. It makes for a superb spectacle when the elite take each other on in a nine strong race. »

Margau’s big day. Bred by Sheikh Mohammed Bin Khalifa Al Thani, Ebraz is out of Massamarie (Tidjani). He is a full brother of his fellow Emir’s Sword (Gr1 PA) winning and current sire Mared Al Sahra; and of Mu’Azzaz: the Shadwell Dubai International Stakes (Gr1 PA) hero; plus Metrag who proved victorious in the Grand Prix de Sa Majesté le Roi Mohammed VI (Gr3 PA) at Casablanca in November. Ebraz is a grandson of Margau (Manganate) – a trait he shares in common with Sharesa (Burning Sand): a winner of the Qatar International Cup (Gr1 PA) on the same card a few hours earlier. The grandam is a full sister to those high class acts: Dormane (Manganate) and Djendel (Manganate). She proved capable of generating a performer of the calibre of Santhal (Djebbel), whose six successes included The Al Maktoum Challenge Round 3 (Gr1 PA). Finally, the great grandam is none other than Mandore (Grabiec): a mare of distinction hailing from the de Watrigant breeding academy.