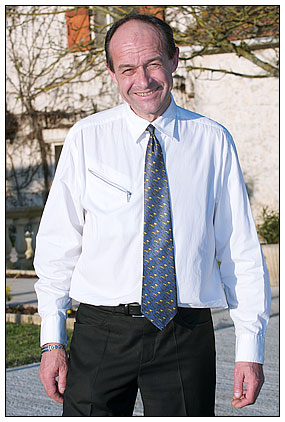 The Haras de Thouars: a constant quest for novelty and diversity

The quest for new bloodlines and top stallions is an ongoing one. Emmanuel Cessac told us: "The presence of these stallions reflects the confidence their owners have and is something which has developed during the course of time. These owners are also appreciative that their stallions can be used for artificial insemination purposes. We are also helping them from a commercial perspective."

Azadi and son. Hailing from the breeding operation of Hassan Mousli, Azadi (Darike) is one of the top stallions available to breeders. Endowed with an original pedigree, his results as a stallion make for remarkable reading – granted that he has had very few runners. As of his thirty-one sons and daughters to have raced in France, seven are black type performers and four of these have won at Gr1 PA level. This list reads: Al Mouwaffak (Qatar Total Arabian Trophy des Poulains, Gr1 PA), Nafees (a triple Gr1 PA winner), Al Nachmiya (Qatar Arabian Trophy des Pouliches de 3ans, Gr1 PA), Al Fahda (Qatar Arabian Trophy des Pouliches de 3ans, Gr1 PA), Ibn Azadi (Prix Shadwell Tidjani, Gr3 PA), Rijm (French Arabian Breeders' Challenge Classic, Gr1 PA), Meelad (second in the H.H. Sheikh Zayed Bin Sultan Al Nahyan Cup, Gr2 PA, and Badi Al Cham (third in Prix Tidjani, Gr3 PA)… Azadi is capable of generating both precocious and durable types. Emmanuel Cessac added: "He’s a remarkable sire and we have been managing him, from a frozen semen samples’ perspective, for a number of years. After the Haras de Saintes closed its doors, his owner chose us as the stallion’s next home. It’s a vote of confidence. His stud fee speaks to those breeders with an exceptional broodmare band. However, for those seeking the best bloodlines, but at a more affordable price, there is the option of using the services of his son Al Mouwaffak.

The latter is well equipped to succeed and notably in terms of his pedigree – granted the fusion of Djourman blood with that of Morgane de Piboul. He has also a lot of quality about him, as denoted the manner of his victories on the racecourse. The covering fee of Al Mouwaffak has been set at € 1,000 (fresh sample). In common with his sire, he is devoid of

Some remarkable statistics. The stallion Runner (Tahar de Candelon) has only had one French runner to date, Al Ryma Monlau (Runner), from a total crop of three in this age group. The latter visited the racecourse just once but it yielded success at La Teste. She beat Neef (General), the future winner of the Prix Chéri Bibi (Gr3 PA), and Maraasem (Akim de Ducor). The latter later went on to finish second in the Prix Nevada II (Gr3 PA). Emmanuel Cessac said of Runner: "He’s an attractive type and the quality exhibited by his only runner augurs well. In tandem with Mahabb (Tahar de Candelon), whose successes have been well documented, he is the only other son of Tahar de Candelon (Tidjani) currently standing in France. His pedigree page is a good one, as this is the family of Guetlato (Grabiec), and his bloodlines are free of Amer, Kesberoy and Manganate blood…" His stallion fee has been set and breeders can send their mares to him at a cost € 1,500 (fresh sample).

Two brothers but with different vocations. Bulus Al Aziz and Benben'ba were both bred for the racecourse but, for breeding purposes, they diverge as their ‘services’ are geared to the endurance market and racing. Bulus Al Aziz, inbred 2 x 2 to Amer, numbers two wins

over 1,300m in Holland. His half-brother, Benben’ba, is a CIE (international endurance) certified performer over 90km. The stud fees of both have been set at 500 € (fresh sample).

A grandson of Ortie. The winner of the Coupe d’Europe des Chevaux Arabes and the H.H. The Heir Apparent Trophy International (Grs1PA), Damis (Amer) is regally-bred: "The same outcross has yielded four stallions and, Damis apart, the list is completed by: Mugadir (H.H The Emir’s Trophy (twice) and the Heir Apparent Sword) (twice); Keilan (H.H. The Emir’s Trophy, Qatar Derby); and Murhib (Qatar International Derby, Gr2 PA). He is a grandson of the remarkable Ortie whose bloodlines reflect the influences of Djouran (Saint Laurent) and Iricho (David). Damis hasn’t covered many mares and is a new arrival this year."

Two North Americans. As of this year, the Haras de Thouars will also distribute the semen

samples of RB Burn (Majd Al Arab) and Big Easy (Burning Sand). In France, RB Burn proved himself to be a good three-year-old after finishing second in a solid edition of the

Also of US extraction, Big Easy has a very original pedigree and one lacking in the more common bloodlines which are readily associated with Amer, Manganate, Kesberoy…and so forth. A Gr1 PA winner on the US and the United Arab Emirates (UAE) circuits, he is a stallion whose record stands close scrutiny. Despite being represented by a small number of foals, he has been a regular source of winners in the US and the Gulf states, and ES Ajeeb (Bani Yas Sponsored by Gulf News, Gr2 PA) is a case in point.

The trends of the 2019 breeding season. An assiduous observer of the Purebred Arabian breeding scene for decades, Emmanuel Cessac added : "The stud fee of AF Albahar, a stallion which produces Group class performers, has been set at a very competitive level and this should be appreciated by breeders. The first foals of Al Mourtajez are magnificent, and this should incite breeders who have sent their mares to this stallion to make a return trip. Taking into account his impressive stats, TM Fred Texas should probably have a good season in the breeding shed. That’s also the case with Jaafer as he has produced some very good winners. No Risk Al Maury will almost certainly be in demand – taking into account that his progeny are doing well and his superb pedigree. We are also happy to have in our midst Mister Ginoux, a stallion closely related to No Risk Al Maury."