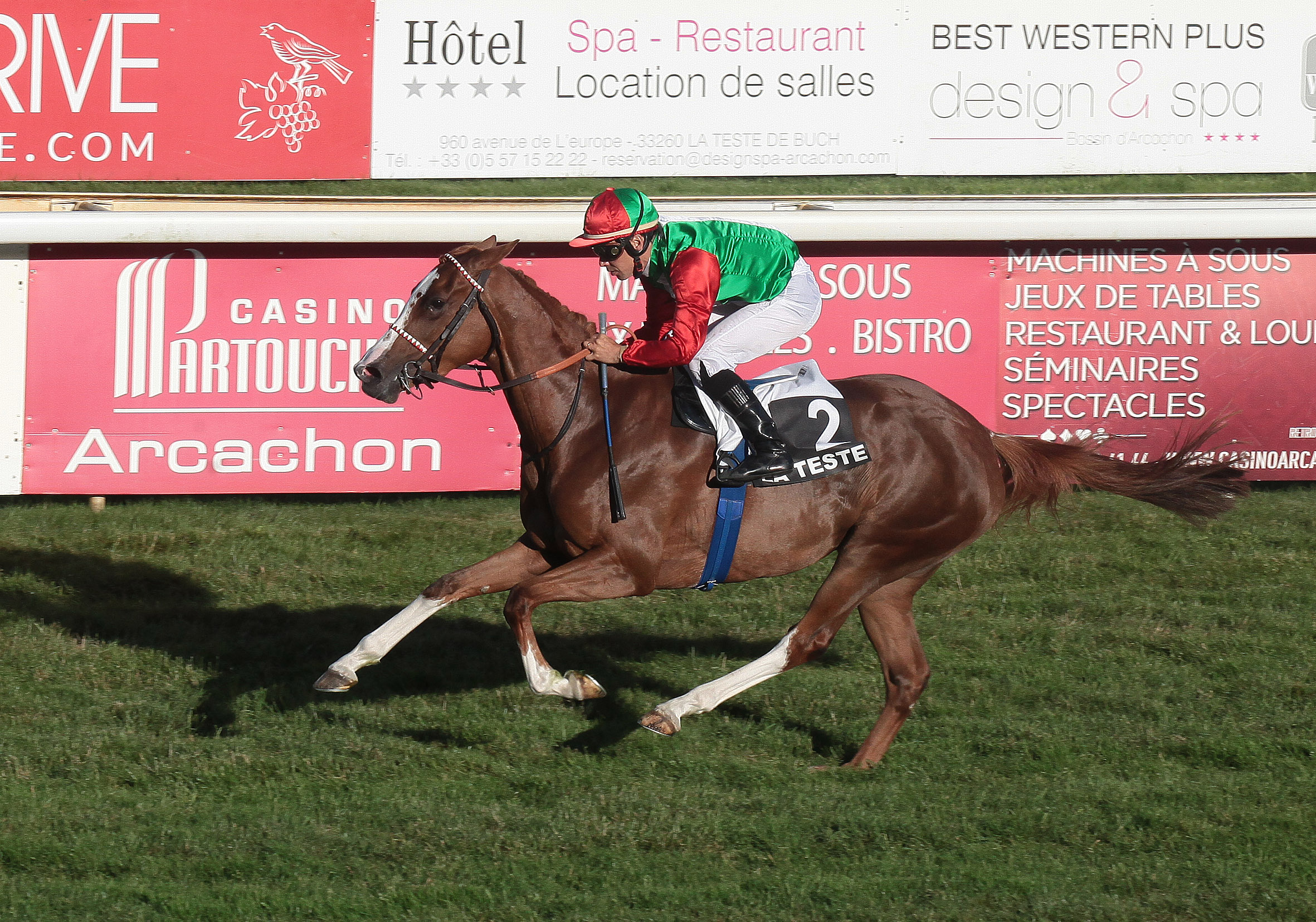 It’s certainly a rarity. We are, of course, referring to the racecourse debut of the previously unraced Hafsa de Monlau in a PA Group race, the Qatar Coupe de France des Chevaux Arabes (Gr2 PA), where she was the only filly in the field. Her racecourse introduction proved anything but conventional, and this also applies to her genesis process and pedigree.

Hafsa de Monlau (Saladin de Monlau) runs in the colours of Arezki Goutal. Very discreet by nature, he’s the son of Marie-Ange Bourdette. His took out his colours only three years ago and they beat the drum for the horses bearing the "Monlau" label. His involvement stems from the fact that he acts as an extra pair of hands on a daily basis at the family stud. Marie-Ange Bourdette said: "What I did for Arezki, I would also done for a capable and hired pair of hands. My son loves horses and he helps out after returning from work. He has been rewarded with a 50 per cent stake in the filly [editor's note: the other half belongs to Robert Bourdette]." Hafsa de Monlau is the third horse to carry his colours. Connections are also very upbeat about her prospects. In the Qatar Coupe de France des Chevaux Arabes, the filly showed that she needed both the run and to toughen up.

at the Haras de l’Abbaye, near Limoges, to begin the breaking-in process, Jean-Charles Escalé immediately made it known that he liked the way that the filly moved. She was a bit on the burly side (laughing) in common with some of our other horses in the same age group. He is used to dealing with the stock we send him as two-year-olds, or when they have reached two and a half, and this is determined by their precocity. Jean-Charles Escalé has an excellent rapport with horses and he’s seen many good horses come and go." At the end of October 2019, the filly joined the stable of her trainer, Olivier Trigodet, and she added: "Olivier has worked for the very best trainers. When he was with Jean-François Bernard, he had lots of responsibilities. He believes in the filly and we trust his working methods. I enjoy it a personal level provided that horses aren’t run into the ground, and my expectations are met." The Bourdettes never hesitate when it comes to entrusting horses to young trainers, and the example of David Morisson springs to mind.

In memory of Ezil. Hafsa de Monlau has a unique background. She’s out of Lawaha: herself a daughter of the high class Ezil (Djourman), which makes this a particularly rare bloodline. Marie-Ange Bourdette outlined the pedigree of the mare by saying: "It’s an excellent pedigree page as denoted by the presence of Chéri Bibi (Baroud III) and Ourour (Duc II)… Ezil was one of the best horses to emanate from the United Arab Emirates. He was still gracing the racecourse at the age of 11 in the presidential colours. He was a Prince among Princes. I remember seeing his image posted on hoardings in both Dubai and Abu Dhabi. He was the record money earner there for a long time. He’s wasn’t a very big horse but his build was very distinct.  I sold his sister Diesta (Esquirol) to Sheikh Zayed. I’ve often been asked how I made the initial approach. To which I replied (laughing): ‘I waited.’ Achievement goes hand in hand with perseverance. Sheikh Zayed passed away on the same day that Ezil and Diesta did. They were his companions in death. » Regarding the arrival of Lawaha at ‘Monlau’ she added: "She was unraced. When Sheikh Zayed died, his string was dispersed. I bought some of the lots including Lawaha. She has produced Aïcha de Monlau (No Risk Al Maury), whose two wins comprise the Prix Razzia III (Gr3 PA). The latter was subsequently sold to Qatar. We have a product by Al Mamun Monlau (Munjiz) who is stunning."

A daughter of an Iranian-based sire. Hafsa de Monlau is a daughter of Saladin de Monlau (Dormane). After winning his initial two starts, including the Shadwell-Prix Tidjani (Gr3 PA), his career was interrupted through injury. Marie-Ange Bourdette explained: "He was a very good horse. He was subsequently operated on before undergoing a course of thalassotherapy. However, it didn’t do the trick. So we sold him as a stallion prospect. Consequently, he is enjoying an idyllic existence in Iran where he’s a real pasha (laughing). He’s injecting some new blood into the country. There’s tendency towards too much in-breeding in Iran, as was the case in Tunisia with Esmet Ali (Hazil) and Dynamite III (Esmet Ali). The Iranians have great confidence in this stallion. However, we have kept some of the sire’s frozen semen samples which have been entrusted to the care of Emmanuel Ceyssac at the Haras de Thouars. That is how Hafsa de Monlau came to be born…" Jean-Pierre Deroubaix works with the Iranians on a regular basis and he added: "The ‘new’ Saladin de Monlau bloodline is proving very popular. The Iranians source their horses from Qatar, Abu Dhabi and Europe. Their PA Arabians are registered with WAHO [World Arabian Horse Organisation] and Qatar is the prime source, as Emirati horses can’t travel to Iran in view of the current situation. Although the Turkish border is open to horses coming from Europe. They also have local breeds, whose characteristics are Oriental although they don’t have a WAHO passport. Because of the various wars, the Stud-Book hasn’t always been updated. There is a designated programme for these type of horses, another for the Akhal-Teke ‘breed’ on the northern frontier, and one set aside for English thoroughbreds imported from Europe and the US."

The uncommon fate of Sniper de Monlau. The name of Arezki Goutal has featured several times in his capacity as a breeder in the programme notes. A situation that can be attributed principally to Sniper de Monlau (Câlin du Loup). The mother explained: "He was a horse whose ‘French’ career never took off. So he was sold to a buyer in the United Arab Emirates. The horse needed to achieve his destiny." The sale took place at the ADIHEX [editor's note: the Abu Dhabi International Hunting and Equestrian Exhibition] centre at Abu Dhabi. "During the course of the ‘exhibition, which is dedicated to hunting and equestrianism, I sold Sniper de Monlau and two other horses… and all have won. The sale was something of a ‘wild’ occasion, and Jean-Claude Alliès, who I met during the exhibition, did the translating for me. Helal Al Alawi put Sniper de Monlau through some light work and he finally said to me: "This is a magnificent horse." Third in the 2017 edition of the Dubai Kahayla Classic (Gr1 PA) 2017, and a PA Group winner to boot, he has proved a veritable money spinner. Sniper de Monlau is currently standing as a stallion in the UAE. He’s a much sought after sire and we’ve even been asked whether we wish to breed any of our mares to him. There was even a song dedicated to the horse, and he has his own personalised fan club! It was to prove a real boost for our breeding operation." Jean-Claude Allies oversees the international ‘development of the Paris-Turf group. He recalled: "During the course of the sale, I was translating on behalf of Helal Al Alawi and the other members of his team. I would like to point out that I took no commission (laughing) from the sale. Sniper de Monlau is a horse which had difficulty in finding his feet during a race, before finishing at a rate of knots. When he contested the Qatar Arabian World Cup (Gr1 PA), I said beforehand that he wouldn’t act at the track, that it was all going to prove all too much for him, and that he wouldn’t feature….and that’s what happened." 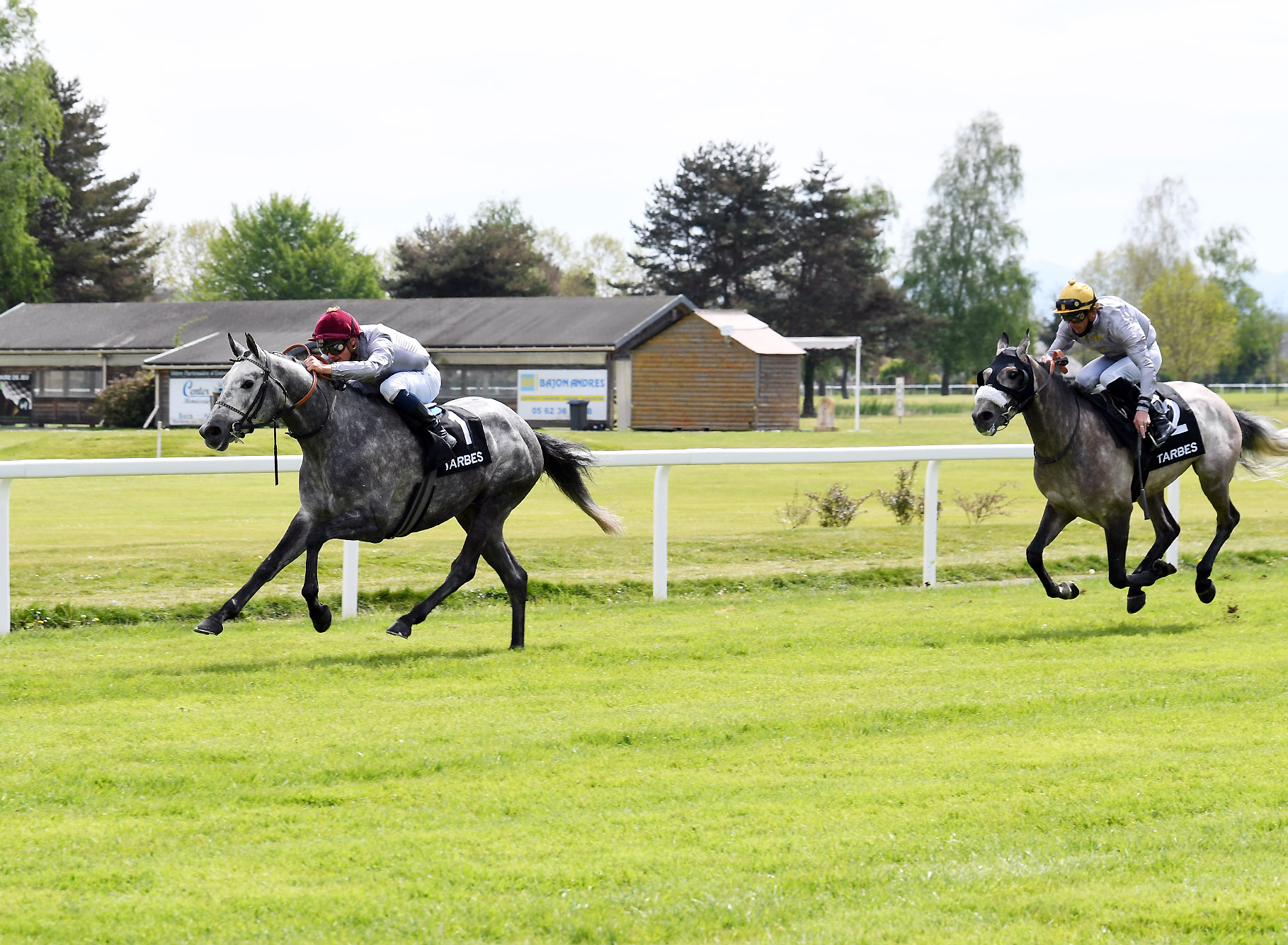