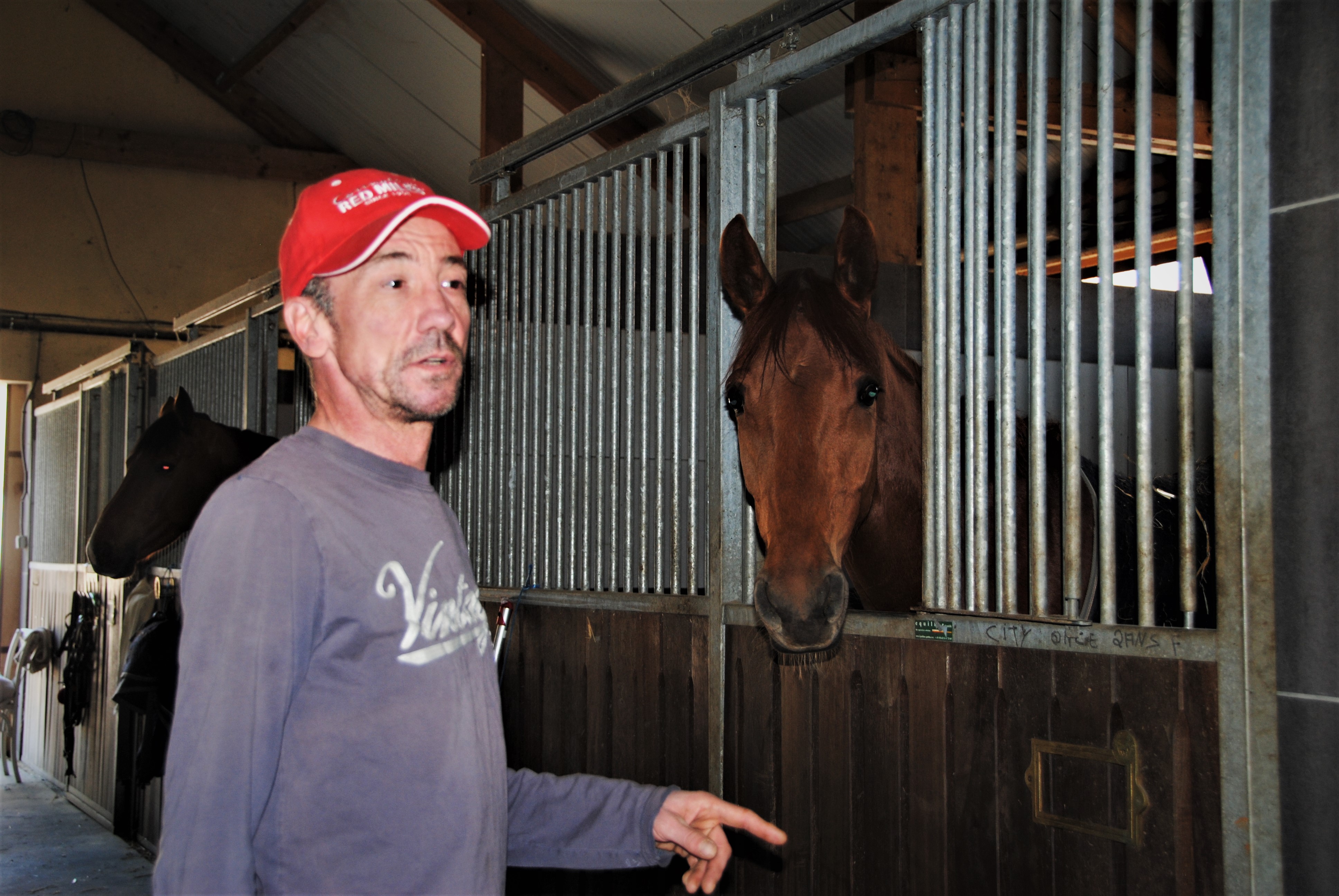 Yoeri Mathijs: "I was fortunate enough to ride Amer"

A trainer since 2018, Yoeri Mathijs is based at Lamorlaye where he has around 20 horses in his care. In addition to his English thoroughbred contingent which race on the flat and over jumps, he’s the only Chantilly-based handler which trains PA horses.

Giving up everything and making a living from horses. That was the decision taken by Yoeri Mathijs, who was 26-years-old at the time. Hailing from Belgium, the man now training racehorses at Lamorlaye was previously a student at the Beaux-Arts, and was initially destined to become an architect. He told us: "I’m passionate about art but have always wanted to be involved with horses. It’s something that’s hard to explain as I had never ridden a horse before!" Further down the line, Yoeri Mathijs met an owner of Arabian show horses and he added: "I became fascinated by PA horses! So I started riding horses for my own personal pleasure and later acquired some young PA horses." These were the stepping stones to Yoeri going racing at the Belgian track Sterrebeek. "This attracted me even more. So I took a punt and knocked on a few doors. An opportunity were soon presented itself. Initially, I worked on a voluntary basis as I had no previous experience. I learned to ride racehorses. It went very well... it was as if it was tailor-made for me. I also did a bit of race-riding for a year with the optic of just enjoying myself."

Learning on your travels. After his initial Belgian experience, Yoeri Mathijs headed to England:  "I wanted to go to Newmarket. There I worked for Gillian Hay - the trainer of His Highness Sheikh Abdullah Bin Khalifa Al Thani’s horses. It was a real stroke of luck to work for this outfit. As working for the Sheikh enables you to be around the best horses. So I was fortunate enough to ride the excellent Amer (Waki), and he went on to sire a very large number of PA horses..." In England, Yoeri Mathijs also worked for Sheikh Hamdam Al Maktoum. He added: "I worked for Shadwell’s PA division. I was involved in the pre-training and breaking-in processes. Over a period of several years my time was equally divided between Newmarket and Dubai where I spent six months each... and was assistant trainer to Gillian Duffield."

After the Dubai period, the Belgian trainer also got a taste of the jump racing world: "It was a rewarding experience. I really enjoyed it. However, I didn't stay long because it was very expensive to live in the Brighton area."

After these experiences, Yoeri Mathijs tried his luck in France. He worked for André Fabre for around five years. He said: "I ended up by doing a lot of travelling! I accompanied Byword (Peintre Célèbre) to the Breeders’ Cup in 2011. We also sent over Brigantin (Cozzene) and Announce (Selkirk). I also accompanied Byword to Hong Kong for the Hong Kong Cup (Gr1). They proved to be two very pleasant experiences. After that I returned to England and linked up with Simon Crisford."

A serious accident. A few months after hooking up with Simon Crisford, Yoeri Mathijs was involved in a serious accident which threatened to end his involvement with horses. He said: "The accident had nothing to do with horses. I had a broken spinal cord and struggled for two and a half years. I was paralysed from the neck down. I couldn't walk anymore...However, on account of my strong character, I managed to recover. I should have been confined to a wheelchair for the rest of my life. Yet now I can even ride a horse." Although the trainer is still suffering from the after-effects of the accident, he’s able to ride his pony and keep an eye on his horses during training: "I prefer to be on horseback to watch the training. For it’s not the same when you are on foot on the training grounds. As I can follow my horses aboard my pony. I try to ride out for three or four lots when it's not too cold." Despite this situation, Yoeri Mathijs did not let it get him down. As in 2018 he obtained his trainer's licence. He told us: "I was contacted by Marcel Muzy and he asked me if I wanted to take out my licence. I gave him an affirmative answer. He owns the Élevage de Bouzouls in the Aveyron region. He’s passionate about PA horses."

From all disciplines. On behalf of Firmin Covinhès, Yoeri Mathijs trains Isis de Linsou (Al Mamun Monlau), and the filly began her career with a seventh place at Bordeaux-Le Bouscat on April 17th. His intake from the Élevage de Bozouls comprises Horus de Bozouls (Muguets de Pascade) and Ismée de Bozoul (Muguets de Pascade).  He said: "I have five PA horses in the yard. Two are not yet on my list as they haven’t been broken in. I plan to do this myself because all the facilities are in place for this. I find it stimulating to get to know the horses from the very beginning." Yoeri Mathijs can also rely on 13 horses owned by Marc-Élie Uzan: " I met Marc-Élie Uzan when I was looking for a new stable. He offered me his facilities where I am now based, and also suggested that I should train his horses. I like France, and also have a liking for England, but here in Chantilly we have the best facilities. I love the place. Given the number of training tracks, added to the forest, I don't want to be anywhere else. It's the ideal place for training horses, which applies equally to PA horses as well as other breeds..."